How I Met The Rock Gods

If there is one thing you have to know about Sardinians it is that they are so laid back they are practically horizontal. That was the pervading theme of my first archaeological expedition, a week doing experimental work in Serri, Santa Vittoria. A gap year student with no prior experience other than my archaeology A-Level and a summer building Iron Age round houses at Butser Ancient Farm, I was nervous enough flying on my own! One hour after my arrival, and I was still in the airport, without phone signal and any knowledge of the Italian language beyond, 'Is this vegetarian?' (it was the phrase I had found most useful in Rome). Soon enough, the rest of the party arrived, two Italians, two Sardinians and four Romanians. Their English put mine to shame. 'Aha, you must be Julie!' shouts one. Er...no, not quite...

They bundled me into a four-by-four and off we went, driving like maniacs in a country where there are so few cars that when two pass each other they stop and say hello. A few hours down the line and I was led down a tiny path to a beautiful little guest house. 'Just dump your stuff. We'll be back in two minutes.' Two hours later, they returned. I wondered at first if that was a mistake on their part, but I soon realised that was just the Sardinian way. Dinner that night took over three hours. With a wonderful disregard for anything resembling health and safety they took us to an excavation at one in the morning. 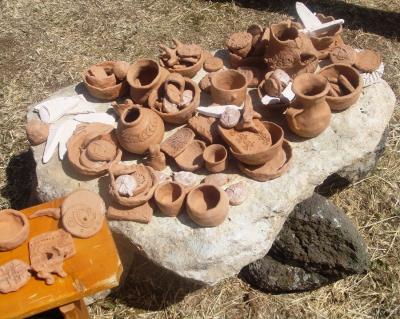 And so to the archaeology itself. After a morning of doing, well, nothing, we finally got down to purpose. Experimental ceramics. My team, a group of local volunteers, and a group of orphans and nuns from the local town got cracking on a series of coiled pots made out of the local clay. A bit like the ones you used to make at school, shove a load of potpourri in and then give to your mum as a Christmas present. Starting with a round base, you build up the sides of the pot with sausages (a technical term, I believe) of clay. We only used traditional implements like wooden sticks and slabs to shape our pots. Possibly why mine looked a lot like a banana.

The second technique I learnt was slab building. Here, you create a sort of net from clay, and build it up into a shape, although this technique only really works with squares. The sides are stuck together with a little 'glue'-a clay and water mixture which is daubed onto a series diagonal strokes made on the sides of the slab with a wooden stick. As I grew, well, at least reasonably competent, we expanded our range from pots to a more eclectic selection of unidentifiable quadrupeds and mini versions of our countries' most famous archaeology. I did a fine roundhouse, complete with thatched roof, although I was reliably informed that Sardinians do not agree with my favourite t-shirt's slogan that 'Stone Henge Rocks.' 'Stone Henge...' quoth my group leader, 'does not rock. Sardinia's dolmens, now they rock!' The dolmens in question reached to my knee and, while abundant, did not match Stone Henge's grandeur in any way, I am patriotically happy to say.

Meanwhile one of our team was constructing traditional Sardinian 'Rock Gods' to grace the wall of our site enclosure. Rather than being carved out of rock, it was a basic arched structure of chicken wire with canvas stretched over it. This was then daubed with a mixture of gravel, clays and traditional dyes like iron oxide to simulate a craggy look. Facial features were created out of rolled up canvas and stapled on. When they were finished, stretching out over the landscape, they looked pretty impressive.

Eventually we had created enough ceramics and, after waiting the allotted time of most of the day, construction began on our kiln. Mud bricks arranged in a traditional up-draft arrangement and daubed with a fragrant mixture of mud, water and straw. A small chamber was constructed out of old pot sherds and the pottery was placed inside. A small hole in the side of the kiln wall allowed us to stick a thermometer in and check the temperature after we lit the fire at the front. And then the waiting game began. The kiln had to be lit for around twenty-four hours to bake the clay. Luckily, I got the day shift, although this did mean several long and tedious hours of poking bits of straw into the fire.

As a bit of a tourist hotspot, several curious folk turned up to ask about our work. Thankfully the age old Time-Team question hasn't reached Sardinian shores yet, but we began to get a bit bored of repeating the same answers ad infinitum. 'Let's pretend we're all English, and don't understand Sardinian,' suggested one of my team. I hardly need point out this required no acting work on my part. Securely equipped with a load of random English words, my team and I faced down the inquisitors with phrases ranging from, 'car-park,' to, yes, 'my hover-craft is full of eels.'

We took a day out to let the kiln cool and take in the local sights. Firstly a museum of local obelisks, ranging from the plain to the bizarrely carved, with frankly odd faces. Debate still rages as to what exactly they represent, with two main factors disagreeing on whether or not they are males or females. Second on our journey was the red castle, a massive stone structure covered in bright red lichens. With no cement holding the stones together, the building was rather precariously held together with wood splints and rubber bands. It came with a collection of Iron Age round houses and storage rooms, although they were really more touristy than accurate. I am not quite sure what our third stop was as unfortunately I collapsed at that point, and had to be driven back to the guest house, whether this was because of the extraordinary heat or the glasses of vino I had consumed at lunch I am still not entirely sure.

We got back to the site the next day to find the kiln had already been opened without us. Half of our ceramics had gone. A local museum had come in early and taken some of them for display. 'And the orphans,' informed the site manager. Great, orphans stole my round house. The remaining pottery was divvied up between us. 'Wait we haven't done the procession yet!' cried our camera-man. 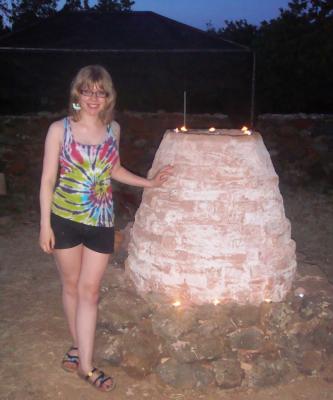 Did I not mention the camera-man? The entire week we had been followed around by our own personal crew of camera men, mic operators, sound guys, you name it. Archaeology is big in Sardinia, so big it gets taught in primary schools and we were to be the stars of some sort of educational video. Probably on the merits of waiting around for hours on end. I had also been interviewed about why I thought Sardinia was such a great country, which was apparently taken for usage by the Sardinian tourist board, although thankfully I have never found the footage. Our procession was the final piece for the video. After debating for five minutes over whether or not I counted as a virginal maid or a woman (turned out it was the latter), I was draped in the appropriate type of white cloth, handed a pot with a candle in it and told to walk up the side of a small mountain so I could lay my offering at the feet of the rock gods. Apparently it was a traditional ceremony which meant that while they graciously allowed me to keep my flip-flops on, I had to take out my CND sign earrings. My glasses, which also caused glare on the camera, had to go. After about five takes of this, I was cheerfully asked to smile more and stumble less, a considerable task when you are holding a flame you cannot see an inch away from your face!

And so with this closing ceremony, and a good old fashioned Sardinian knees-up in the local restaurant, my first archaeological expedition came to a close. It was a highly enjoyable and informative experience; not only about archaeology, but also on Sardinian work ethics (did I mention there is a lot of waiting?). To any student of archaeology, gap year or otherwise, I could not recommend this country enough. It has got a wonderful history, dedicated scholars and you will never find people more willing to pump you full of blackcurrant liquor and argue about rock art.