What is the role of cultural heritage for poverty alleviation in the coastal areas of Latin America? Artisanal fisheries are a traditional and crucial source of food and livelihood for thousands of people along the coastline of Brazil (Begossi, 2010). Brazilian coastal communities efficiently integrate modern small-scale fishing techniques with pre-colonial indigenous knowledge, as a "neotraditional mix" (Begossi, 1998). In the coastal areas of Maranhão, one of the poorest regions of Brazil (World Bank, 2004), this culminates in the use of archaeological fish traps (locally denominated Camboas). The traps are intertidal structures consisting of walls built from minerals (plinthite and petroplinthite) available on site. Tidal oscillation (around 7 meters) is the driving force to entrap fish between high and low tide. Although their age is uncertain, 17th century European writers documented the use of similar structures by indigenous people in usually very rich and productive ecotones (e.g. d'Abbeville, 1632; Evreux, 1964). 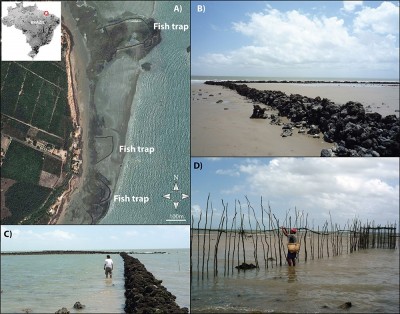 Despite their importance as maritime cultural heritage in lowland South America, these fish traps have received little public or scientific attention (da Silveira et al., 2012). Their impact on local fisheries resources, along with their economic and social relevance in fisheries-based livelihoods has remained undocumented; their preservation and potential to support resilient community development have never been assessed. The study of the "mysterious" heritage and complex nature of the interactions of these fishing societies with their environment calls upon the integration of archaeological, social and environmental sciences perspectives which are rarely, if ever, brought together in Brazil. With the support of the British Academy Newton Mobility Grants (2015), a collaborative partnership was established between archaeologists, human ecologists and economists of the University of York (UK), Universidade Santa Cecília (UNISANTA), Universidade
Bridging ancient and modern artisanal fisheries in Latin American: assessing the role of cultural heritage to poverty alleviation in coastal Brazil

Estadual de Campinas and the Fisheries and Food Institute (FIFO) (Brazil) for assessing the economic and social contribution of archaeological fishing methods to modern artisanal fisheries management in Brazil.

The project is based on a mobility and knowledge co-production approach revolving around (i) a series of seminars in Brazil and the UK in 2015 on coastal archaeology and archaeological science, and on the integration of coastal zone management and poverty alleviation (livelihood, vulnerability, resilience studies in coastal contexts, participatory approaches); (ii) a field school at São Luis (State of Maranhão), with the participation of the fishing communities, to assess the socio-economic importance of fish traps to small-scale coastal communities. This field school will be developed using a participatory and collaborative approach to elicit indigenous knowledge on coastal resource usage and management with communities, enabling mutual learning for fishing communities and the researchers.

A salient aspect of the project is the impact of coastal archaeology in bridging past and modern artisanal fisheries in Brazil as a pathway to increase our understanding about their sustainability. Fish traps are a singular feature of coastal landscapes and their heritage significance is evident. Thus new economic opportunities may be explored for combating the dual problems of heritage's conservation and food security in the poorest area of Brazil. The understanding of fisheries management and the role of cultural heritage to poverty mitigation is of general resonance for policy making, and for the resilience of coastal socio-ecological systems in other parts of Brazil and Latin America.

This project is funded by the British Academy Newton Mobility Grants (Bridging ancient and present artisanal fisheries in Latin America).