The Rock Paintings of Cauadzidziqui Revisited 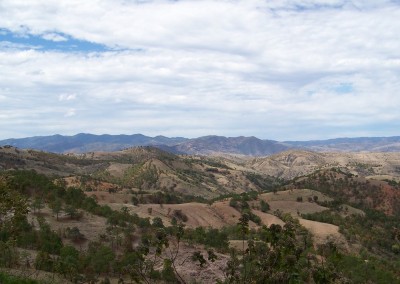 Since Samuel Villela first documented the rock paintings of Cauadzidziqui in 1989, a number of scholars have examined the site and its rock art, with particular emphasis on its Olmec-style paintings (Gutiérrez 2007, 2008, Gutiérrez and Pye 2007, 2008). This paper revisits the Cauadzidziqui rock shelter in order to examine two new sections of non-Olmec-style rock art which, to my knowledge, have not been previously documented by earlier studies.

The Cauadzidziqui rock shelter, locally known as the "Cueva del Diablo", is a shallow limestone cavern situated in the mountainous eastern end of the Mexican state of Guerrero, near the Oaxaca border (Figure 1). The site is approximately two hours south of the city of Tlapa, between the towns of Ocotepec and Ocoapa. The large opening to the rock shelter is visible from the unpaved road which leads to these towns, as well as the surrounding slope and the nearby archaeological site of Ocuapan (Gutiérrez 2007) (Figure 2). About 30 meters to the west of the entrance there is a large spring runoff zone which creates a small waterfall during the rainy season. 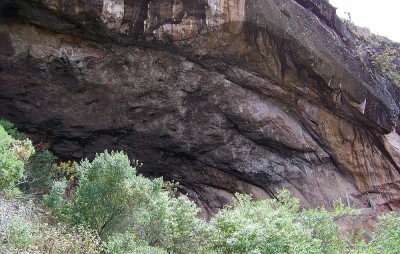 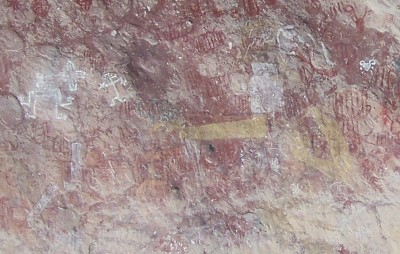 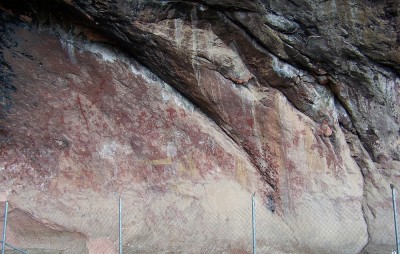 In addition to its well-known Olmec-style mural (Gutiérrez and Pye 2008, 24-26; Villela 1989, 38-42) (Figure 3), the rock shelter boasts a palimpsest of red, orange, black and white non-Olmec-style rock paintings. All of the rock paintings occur in a single large panel, measuring approximately 27m in length and 5m in height (maximum), on the southwestern wall of the shelter (Figure 4). Gutiérrez and Pye (2008, 21-23) argue that the non-Olmec-style paintings date to the Late Archaic or Early Formative period (3000-2000 BC). This is based on comparisons with the rock art of eastern Guerrero and Morelos (e.g. Apostolides 1987, Oettinger 1983) and their superimposition by the Middle Formative period Olmec-style rock paintings.

The non-Olmec-style rock paintings feature both geometric and biomorphic subjects. The geometric figures are characterised by cruciform designs, rectangles with lines, denticulated designs, circular or ovoid designs, dots, star-shaped designs and arrangements of three-to-five vertical lines. The biomorphic images include anthropomorphic designs, hand prints, zoomorphs and vegetal designs. Most of these paintings occur in small groupings or sections throughout the panel.

The New Rock Paintings at Cauadzidziqui 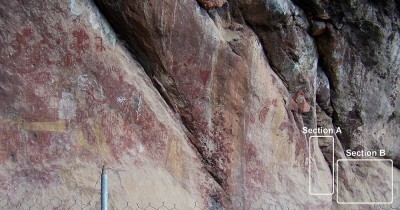 Figure 5. The new sections of rock paintings in relation to other parts of the painted panel. (Image Copyright: Arnaud F. Lambert).

The new sections with which this paper is concerned are located on the western end of the painted panel, next to a section containing several vegetal designs and a polychromatic comb-like design painted in red, orange and black paint (Gutiérrez and Pye 2008, 21-22, Figures 2 and 6) (Figure 5). The two new groupings came to light after a re-examination of field notes and photographs taken by the author at Cauadzidziqui in January and March of 2010. They contain a total of twelve red painted figures (Figures 6 and 7). Most of the shapes are geometric but there are a few biomorphic designs.

The first group of paintings, tentatively designated as "Section A", consists of five separate images. The uppermost figure (Painting A-1) is a circular or ovoid design with a cleft on the top, measuring approximately 4-5 cm in width. In terms of its overall morphology, it is similar to a larger painted square-shaped cleft mark from Cerro Tlapacoya, México, dated to the Early Formative period (1250-800 BC) (Lambert 2013, 177). The other four rock paintings are located further below. These are smaller in size, averaging 2-3 cm in width. In this sub-grouping, the top image (Painting A-2) appears to be a stick figure depicting a quadrupedal zoomorph with antlers or erect ears, possibly a deer or canid. Analogous forms have been recorded in the North Shelter 2 locale at Chalcatzingo, Morelos (Apostolides 1987, 181, Figure 12.24). Below this figure is a vegetal design (Painting A-3) with bud-like or leaf-like extensions situated along a diagonal stem measuring about 7 cm in length. 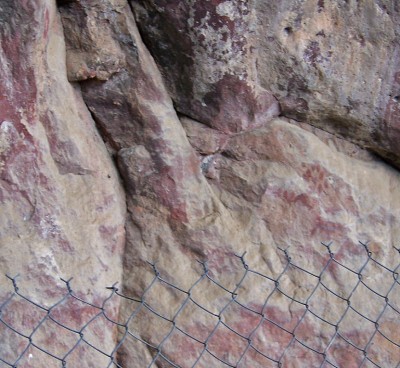 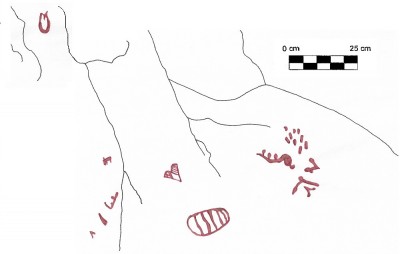 This type of painting is fairly common at Cauadzidziqui, and has been documented in many other sections of the painted panel (Gutiérrez and Pye 2008, 21, Figure 2). It is followed by a triangular geometric figure (Painting A-4) and a V-shaped linear design (Painting A-5).

On the eastern periphery of the section, there is another V-shaped linear design (Painting B-1). The ends of this 3 cm wide figure are marked by two triangular forms. One of the triangles contains transverse lines; the other has a forked line. Just below this painting, there is an oval shape with transverse lines (Painting B-2). It measures approximately 6-7 cm in length. This type of image is ubiquitous at the site; Gutiérrez and Pye (2008, 21-22, Figures 3 and 4) documented two dozen similar paintings. To the west of these two figures, there is a sub-grouping of five paintings. From the top to the bottom, these consist of a 7 cm wide group of dots (Painting B-3), a 12 cm long curvilinear vegetal form (Painting B-4) with bud-like projections, and three V-shaped designs (Paintings B-5, B-6, and B-7) measuring about 6 cm, 10 cm, and 5 cm in width respectively. Unlike Paintings A-5 and B-1, these three V-shaped paintings are characterised by circular elements appearing either on the ends of the figures (Paintings B-5 and B-7) or on their vertices (Painting B-6). Even though they are clearly important, we can only speculate on the significance of the V-shaped paintings as a class. One intriguing possibility is that the creation of these bracket-like images in a cave-like context may have alluded to the fertility of the earth (Gay 1972, 26, Villela 1989, 43). The repetitive nature of plant-like motifs at Cauadzidziqui is also noteworthy and may symbolise themes related to germination and fertility (Villela 1989, 42).

Table 1 provides a useful summary of the different types of images present in the new sections. Of the twelve new rock paintings, the most frequent designs fall within the geometric category (74.98% of all the new paintings). These include the five V-shaped linear designs, the circle with a cleft mark, the oval with transverse lines, the triangle and the group of dots. The remaining images (24.99%) belong to the category of biomorphic motifs, such as the quadrupedal zoomorph and the two vegetal designs.

The characterisation of Cauadzidziqui, along with the painted caves of eastern Guerrero (Juxtlahuaca and Oxtotitlán), as sanctuaries or cult sites has a long history in Mesoamerican archaeology (see Gay 1967, Grove 1970, Villela 1989). Much of this view is based on the extrapolation of Classic and Postclassic period Mesoamerican worldviews from the Olmec-style rock paintings at these sites. While there is no doubt that the cave symbolism underlying the rock art at some of these sites enjoyed a great deal of chronological and inter-regional continuity (Lambert 2014; Stone 1995), when dealing with paintings dating to the Late Archaic and Early Formative periods (3000-2000 BC), it is crucial to examine the rock art on its own terms.

As a step towards this goal, the purpose of this paper was to provide information for several previously undocumented non-Olmec-style rock paintings at Cauadzidziqui. A total of twelve new rock paintings were added to the corpus of rock art at the site recorded by Villela (1989), Gutiérrez (2007), and Gutiérrez and Pye (2008). Although some preliminary interpretations and comparisons were attempted, they should be treated as tentative ideas until a more thorough investigation of the Late Archaic and Early Formative period rock art of these sites is completed.