A Conference in Review: the Palaeopathology Association's Meeting in Vienna 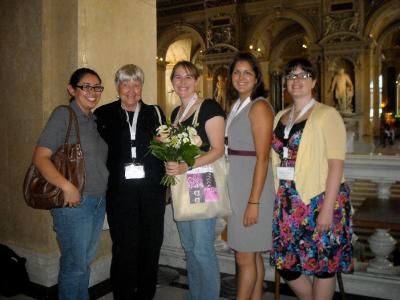 The Naturhistoriches Museum of Vienna, Austria, hosted the 18th annual European meeting of the Palaeopathology Association. The conference opened early on the morning of the 23rd of August 2010, and closed shortly after midday on the 27th of August 2010. This meeting, according to the organisers from the Naturhistoriches Museum Wien, was the largest yet to be conducted by the association in Europe, with over 300 enrolled participants, 45 posters on display and over 80 communicated papers.

The case studies presented varied tremendously, with most coming from European and Middle Eastern sites but papers on Southeast Asian and Pacific Island populations were also present. Disease pathologies and their manifestations was a mainstay of the papers with a few delving into the bioarchaeological side of osteology. The four days were a whirlwind of networking, presenting, sitting and discussing the problems facing palaeopathology today. For example, the need for better understanding of the pathologies so eagerly presented and their mechanisms, as well as reminders by long established physical anthropologists to the next generation to keep up with the current medical research into bone studies and pathologies affecting the nature of bones. Unexpectedly, I discovered something of myself along the way of mind-numbing paper presentations, learning that academia is not so cut and dry as I hoped it would be. In fact, the research side of it is quite terrifying with presentations of more-or-less speculative interpretations.

Palaeopathology is rife with such subjectivity. I know it does not mean to be, and is trying harder to lose the reputation of being a 'pseudoscience', but as Hershkovitz and Dar (2010 unpublished) implied, palaeopathologists make diagnoses of skeletons without truly understanding the disease itself and how it works, only learning how to recognise the lesions and create while simultaneously discredit differential diagnoses. What I found disturbing about this conference, especially as I come from the viewpoint of an archaeology student, was the lack of context placed with the remains. Certainly most papers briefly mentioned the site's dates and provided a short story of the group of people involved, but they did not delve further than this. They did not connect the diagnoses with the people and society. What were the social implications of having individuals with these lesions? What could be the factors that lead to the presence of these specific pathologies?

One paper discussed a late Roman horse-breeding community in Austria and presented the signs of trauma in women as victims of abuse (Berner 2010, unpublished). Now, do not get me wrong- I am one of the world's most ardent feminists and am all about highlighting such sensitive issues, but I was irked by the lack of questioning of such gendered roles- why could not the scenario involve women helping raise the horses and gaining trauma from subsequent accidents? Why do the women have to be beaten? (Perhaps this is the feminist streak coming out boldly.) I was lucky enough to air these comments to a friend present at the conference who is experienced with raising horses and she was kind enough to explain the typical injuries associated with breeding. Still, I am sure that there were members of the audience present who had no experience with horses and would have been led to believe that the men of this community were wife-beaters without explicitly knowing how the presenter had reached this conclusion.

After talking to a few palaeopathologists, I found that I was not alone in my opinion, but they mentioned that these meetings began as a way for physical anthropologists to sit down and analyse unusual lesions on human remains. The anthropologists face a danger that is ever present when we separate archaeological context from palaeopathology: forgetting the experiences of the individuals and the people who buried them, and creating specimens rather than persons. In the same breath, there was a great criticism for a paper that did try to incorporate both historical narrative with skeletal data, claiming that it was too speculative and pulling interpretations of the grave goods to fit the author's aims. Michael Schultz (2010 unpublished) presented the paper proving the existence of the fabled Amazonians, stating that female burials from an area in the Near East held grave goods that established them as warriors.

Perhaps it is worth mentioning here my previous attendance at another conference- the Institute for the Public Understanding of the Past's "Packaging the Past for the Media: Communicating across Museums, Television, Radio and the Internet in a Multi-Platform Era" in May 2010 (see Issue 12's article by the author). I discussed with many of the bioarchaeologists present about the danger of losing sight of the data in creating a story to present to the public. Here I worry about losing sight of why we are studying these individuals in the first place. This is most likely to come across as the naïve view of an undergraduate student, but I always considered the study of human remains to be deeply linked to archaeology, but across the world, in many places, there is a fine line between the two subjects and thus a great need seems to arise from this divide. Nick Thorpe of the University of Winchester presented a paper entitled "Being Disabled in Later European Prehistory" (2010 unpublished) and that while it is important to not skew the data to fit a story, the story behind the remains is nonetheless essential. In fact, so odd was his presence as an archaeologist at this conference, he opened with a joke saying that, upon meeting other conference attendees and telling them what he does, he was asked, "Oh, what are you doing here then?" Divorcing the archaeological context from the bones takes away from developing a complete understanding of the past. Yes, disability may have been present in the individual, but what will that tell us about the society who buried that individual?

As my first international conference, I was quite nervous about meeting new people and presenting my ideas, wary of being the overeager undergraduate (although I am certain that at times I was this person). Yet I gained so much more from sitting through the 9-hour days than I would have in a lecture hall or seminar room. I began to understand the warning of lecturers as they talk about our understanding of the past as not being set in stone and denying the existence of our personal biases within our work. I felt that a lot of people were nervous as I was, worrying about misinterpreting lesions and being called out on it and so forth. The four days in Vienna were a learning experience I am not likely to forget any time soon, and mainly driving home a point I have encountered before- balance the story with the facts.

Sk-Helen-ton: The Osteology of Myself
Helen Mackie

Post-Holier Than Thou: Archaeological Theory and Me
James Preece