Excavation as Theatre - Why on earth not?!

I'm going to stick my neck out and say I love archaeology in the media. Its trashy, inaccurate and sexy. I love it! And this is for more reasons than the entertainment that can be gained from sitting through half an hour of BoneKickers hurling abuse at the TV with room full of people doing the same thing. We live in a media-dominated, consumer society in which most ideas have to be watered down almost to non-existence to be broadcast. It's a shame but it's the society in which we live, for better or for worse. This society is also a capitalist society where everything costs money, especially archaeology, and however much I love our discipline it is one of life's luxuries. It helps for people's sense of identity, gives our lives a context and teaches us lessons — but if we got rid of every archaeologist tomorrow the world would not collapse and many people would believe their lives to be unaltered. This is because they do not view archaeology and the past as relevant to their lives or interesting in any way. If we want funding in archaeology to increase we need to catch the public's imagination and show them how fascinating the past can actually be. To me this is where programmes which drag archaeology into the public's eye, however fantastically, have a vital role.

I'd guess that there are few archaeology students (however much they would scoff at the idea now) who were not initially attracted to the discipline by life-size pictures of a sweat —soaked Indiana Jones, the enthusiastic ramblings of Tony Robinson, the geeky charm of Daniel Jackson, or the make-your-own Tutankhamun death mask that you could buy when you were a child. The media can grab people's imaginations like little else these days and it's a tool that, as archaeologists, we should exploit rather than complain about.

"But these shows don't show archaeology as it really is?" So? How many people would really be drawn to archaeology by tedious shows recording hour after of mind-numbing trowel work which reveal ...oh wait... absolutely nothing?! No one would be. You would not expect shows like CSI to give an accurate view of forensic science — its sexed-up, its fast-paced, and its popular! You need to grab people's attention before you can get them to learn about a discipline. Ok, if we were teaching this view of archaeology in universities or in the field I can see the problem with it but these shows are but a tool to get people into universities or into the field where they can learn what its actually like.

Media representations of archaeology like Time Team, Indiana Jones, BoneKickers etc are just that: media representations. Anyone who knows anything about archaeology knows its not like that, however much we wished our lecturers looked like Harrison Ford, and anyone who does not just might be inspired to pick up a book on archaeology, attend an open day or get involved with a site. 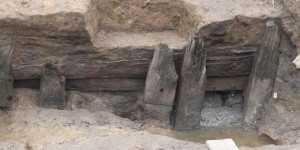