Anyone who likes the Vikings or indeed actually reads their emails from the department will have heard about the latest discoveries at Hungate. The new discoveries were released to the press on Thursday (9th October) and have been followed up by extra tours to the public over the weekend to show off the new discoveries to their best. I went along on a tour on Sunday just to see what all the fuss is about. 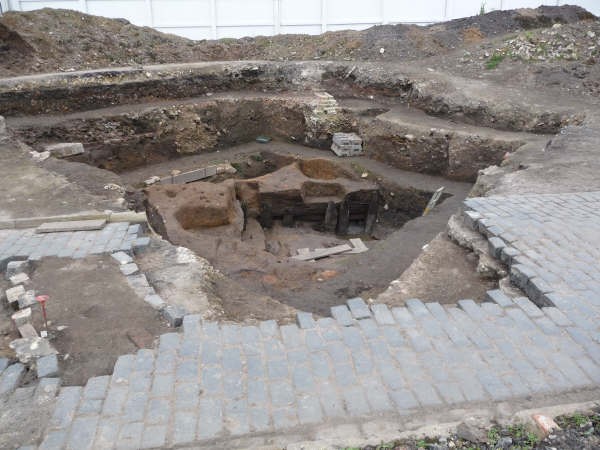 Hungate is a five year project being funded by the Hungate Regeneration Ltd and being excavated by the York Archaeological Trust. The site has been a goldmine of archaeology and one of the biggest digs in York for 25 years. The archaeology spans over 1000 years; with the new Viking evidence and reaching all the way to the most recent archaeology of the Victorian Slums. The most recent discovery has got all the archaeologists on site very excited and could provide vital evidence about the history of Viking York. If you have been to Hungate before you will have seen the remains of the Victorian street, Haver Lane, running through the site. Just behind this street, in the left hand corner of the site, the remains of a Viking age cellared building have been found. Until now it's been impossible for anyone on tours to see into the hole the YAT team have wedged themselves in, but due to the discovery the concrete walkway in place at the excavation has been specially extended to provide a view of the Viking house for the public, a view which is impossible from any other angle. The house found at Hungate is very similar in style to those found at Coppergate, seen at the Jorvik. Without dating the timbers from Hungate that are currently still in situ, the house's date isn't completely certain. As they are a similar style to those at Coppergate and the pottery that has been found in the infill of the building, it is likely that the cellared building probably dates to around 970 AD, the same as those 10th century buildings found at Jorvik. One thing was different in this building which makes it unique compared the houses at Coppergate; it appears the wood used to build the cellared building was re-used wood. No example for recycled wood exists at Coppergate. The wood used in the cellar appears to have come from a ship's hull which is evident by holes in the timbers which are not of a building context. The type of ship that these timbers came from is thought to be a clinker built ship, a very common ship building style in the Viking age. From the new walk way you can actually see the dowel holes in the timbers. 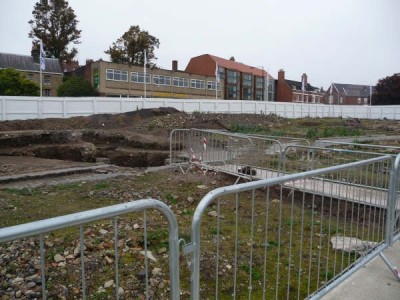 The cellar is dug into the ground and re-enforced with horizontal wooden planks and then braced by larger wooden posts. One of the walls is also re-enforced with an earthen bank, another thing not seen in the houses at Coppergate. The cellar could have been over 5 foot in height and appears to have two phases of building although the second was still very early on in its construction. It was extended around 40cm and this appears to be due to a patch of soft ground found in one corner of the cellar.

I shouldn't need to tell you that York has extremely good preservation and this is definitely the case at Hungate. The cellar is about 3 meters below the modern street level and the timbers have remained water logged for over 1000 years due to the high water table. This excellent preservation has led to finds similar to those found at Coppergate, such as the Viking bone ice skate, stunning Viking combs, leather objects, oyster shells, butchered bones, pottery, wooden objects and a rare amber bead. 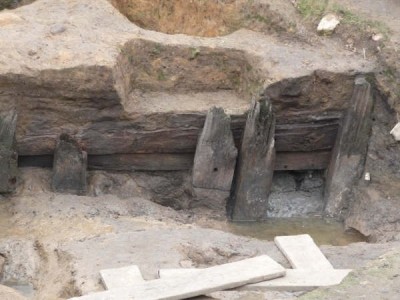 The building could be lying on the eastern edge of the Viking town of Jorvik, making it extremely significant for establishing the town's extents; it could have been much bigger than originally thought. It is possible that more Viking houses will be found at Hungate and the archaeologists on site are suggesting that a second may exist directly behind the first. Archaeologists at Hungate still have about 3 years in which to investigate this site before the site is completely developed although the developers have already previously agreed not to build on any cemetery found on the site, to build around it instead. One wonders what will happen if Hungate indeed turns out to be a second Jorvik. The timbers from the house will need to be removed and taken for investigation at the YAT labs and the hope is that the timbers will eventually go on display, possibly on site at Hungate or perhaps in an exhibition at Jorvik. If you want to see the timbers in situ get down to Hungate within the next month before they are removed to be preserved. There are still many questions that need to be answered, most importantly are there any other Viking houses in the Hungate area and just how big was Jorvik or is this a whole new area of Viking York? The answers to these questions will hopefully come in the near future.

For more information visit the Dig Hungate website at http://www.dighungate.com/. If you want to go on one of the tours (highly recommend before the end of the month), they run mon-fri (although more have been added on due to the new finds) from DIG (St. Saviorgate) about 3 times a day and cost a pound.