With an Introduction by Dr John Schofield 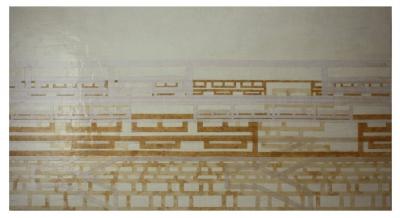 Anyone visiting the Department of Archaeology offices at King's Manor cannot fail to have noticed a new artwork, hanging since early 2011 in the corridor outside administration. Some people understood the significance of the work immediately; others were confused, wondering if the 'masking tape' was significant, or likening it to a Harris Matrix. Unsurprisingly, some like the work and some do not. Some just do not know. But is not that the point of art? To create an environment for dialogue and debate, and to challenge perceptions and preconceptions of what is around us? And is that not also true of contemporary architecture? For this painting, within the 1960's Fielden Building at King's Manor, is a representation of that building, a building which itself divides opinion amongst staff, students and visitors. The picture, like the building, asks us to think. So, take another look at the building. Look at the lines, the symmetry, the contradictions within the fabric and form (notably, brick and cement) and the context. And now look again at the painting, the layering, the textures, the lines and the symmetry (again). Maybe your views of the painting and the building will be unchanged, or maybe not. At least we have thought about these artistic forms, and that is what matters. Here the artist, Hans Hack, gives his views on this commissioned work.

My artwork has not initially developed out of a certain concept but out of a combination of interests and my urban environment. I am fascinated by the aesthetics of so called 'traditional and tribal' art from South and North America, the Pacific and Africa. When I moved to Berlin, I developed a certain style which mixes the cold and plane grid-architecture, which surrounded me everywhere in Berlin, with tribal art.

My early artworks were based on grids found in the city such as from facades and pavements. I developed a way of seeing shapes and characters in the grids of the city which resembled tribal art such as totems and ornamental designs which I then painted or made sculptures of. At the time it was for me a way of making the city more human, to give it something more individual and in a sense an identity. I was making aboriginal art that had never existed before by slightly changing the view on my everyday environment. In a way I was finding the artworks in the urban jungle. This 'discovering' appealed to me and made me look at my environment differently.

This way of exploring the city led me to the idea of doing an imaginary field study whereby an explorer 'discovers' my art works as art that has been created by an urban culture. Due to the rather angular aesthetic style of my works, I called this culture, 'Box Culture'. The project resulted in a booklet which showed most of the artworks I had done so far as artworks created by an urban culture.

Through making my art, I became more aware of and more interested in my environment and places in general - their history, their character, how they are being perceived and how all this information can be made accessible. I thought that a good way to combine these interests and explore them theoretically was to do an MA. I chose World Heritage Studies, being similar to heritage management but with an emphasis on UNESCO. During my studies I became more aware of buildings' fabric, function and how they are reflections of history. 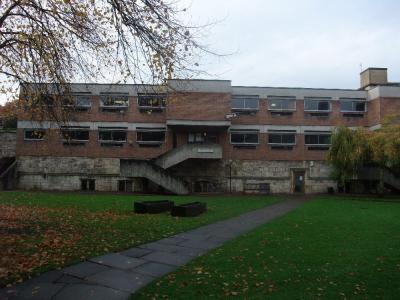 I have since become increasingly influenced by modernist architecture. Its aesthetic appeals to me and I often find that modernist buildings are fascinating historic remains. My artwork today is not so much quoting tribal art and is no longer restricted to existing grids. However, I have kept many stylistic elements of my earlier works. The artworks today have a more architectural look. I do however find that the simplicity and the ornamental design of modernist architecture and of tribal art have strong similarities that are difficult to clearly distinguish.

In the case of the King's Manor picture I approached the building by studying its structure, its setting and its fabric. I tried to find a representation of the building which corresponds with its function as the University's Archaeology department - a place where people study historic remains. It occurred to me that the building with its alternating concrete and brick layers and the steps which seem to 'cut' through the historic foundations, resembles a Harris Matrix. With this in mind I created different ornamental designs which were based on those layers and then composed them. In this phase I also developed the idea of letting the ornamental design of the oldest structure at the bottom follow the staircase to the top, so creating a connection with the present.

The King's Manor picture is the result of using art as method and an approach to a historic structure. It is a way of shedding a different light on the building, which might help the viewer to rediscover or even just consciously notice the building. Perhaps I share this interest with archaeologists studying the contemporary past, archaeologists who take a closer look at the 'taken for granteds' of everyday material culture and thereby help perceive our world from a different angle.

Hans Hack recently completed his MA in World Heritage Studies at BTU Cottbus. He is also a practicing artist. Further examples of his work can be seen at: www.hanshack.com.

A Review of the Public Launch of PALAEO
David Altoft