Imagery and Imagination: Facts and Fantasy in Archaeology

The use of an artist's interpretations in archaeological books and articles, as well as those on television, such as the work of Victor Ambrus, Time Team's Illustrator, are quite often deceptive. The images shown are often composite, showing everything the site has to offer on a small scale, rather than its true nature, where it is spread out over a vast distance. In books, such as Recreating the Past (Ambrus and Aston 2001); liberties are taken and the past reinterpreted to show an idealistic representation of a site or period. The facts which are unknown are often covered; for example by the clever use of weather, such as snow which can be used to obscure site features and hide the detail; and facts known are often exaggerated or misrepresented.

The way interpretative images in archaeology are displayed often appears to be fact rather than interpretation, although the images often say reconstruction underneath this is usually ignored by the reader and taken as reality. Examples of this include the interpretations of Stonehenge, Grime Grave and Star Carr, and these are to name but a few. One of the problems with these images is that they show things for which there is no evidence; such as the Star Carr image which shows a boat and the image of the timber phase of Stonehenge displaying a small village which has yet to be found next to the outer ditch. The idea of showing these features is sometimes a good idea to suggest to the public what could have happened; however, due to the lack of supporting evidence for these ideas, they should not be used. These images are often not selected for their archaeological accuracy but for their romanticism. The main problem with these images is that the artist only demonstrates one reconstruction of an infinite amount of possibilities and the images are portrayed as if they are reality. This is where Verfremdungseffekt comes in.

Verfremdungseffekt is the German word for the distancing effect; sometimes used as a theatrical or cinematic device to make the audience realise that the performance is artificial and that they are viewing a portrayal of the subject that has been created by the artist or director . This means that the audience does not get drawn into a falsified world. Although quite often the aim with a cinematic or theatrical performance is to draw the audience in and captivate them, some directors prefer not to do this and use a far more abstract approach, like Verfremdungseffekt.

The use of Verfremdungseffekt in archaeology is rare. Usually the artist wants to make the image seem more realistic to the public; even if this is not a true representation. There has however recently been a project based around the Mesolithic site of Star Carr, in Yorkshire, specifically the antler frontlets discovered there and their alleged shamanistic origins . The Enkyad Animation project is the work of two University of Bradford Students Alex Higgs and Patrick Hadley who have employed the idea of Verfremdungseffekt in their visual interpretations of the Star Carr antler frontlets. Phase one of their project can be seen on their website here . The animation is a very clever way of showing the well known theory of the shamanistic roots of the antler frontlets and challenges the audience to think more about the interpretation rather than to just accept it as fact. The use of colour and design make sure that it cannot be mistaken as reality and comes across as an idea. The use of music and speech as well as image appeals to a broad range of senses and make it more accessible to a wider audience. If this were applied to more sites then I believe that Verfremdungseffekt would be a worthwhile addition to the representation of the archaeological record.

The use of other senses such as sound; does not work as effectively in other circumstances and is open to misuse as well. Live action displays like the Jorvik Viking Centre, York, mislead the public by only showing one possible interpretation of the noises and surroundings of Viking York. Although Jorvik is based on archaeological evidence, there is no way to really know what York would have been like during this period. As all interpretation of data is subjective, the incorporation of the Verfremdungseffekt approach is needed to show that what is presented is not necessarily what happened.

For museums and live action displays such as the Jorvik Viking Centre the use of Verfremdungseffekt is the way forward and the innovative nature of the Enkyad Project is ideal for this type of display. The Enkyad Project recently won the runner up prize at the University of Bradford's Think Business contest. I look forward to seeing the second phase of the Enkyad Project and hope it is the forerunner to many such projects. 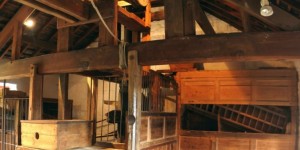