On the 14th July 2014, the bi-annual British Archaeological Awards UK was held at the British Museum. The event began at 2.30pm with a large number of different archaeological representatives present. The BA Awards were founded in 1977, with the aim of raising public awareness of archaeology and the influence it has upon our understanding of the past, whilst celebrating the creativity in archaeological practice. The awards are sponsored by various different archaeological institutes, for example English Heritage, the Institute for Archaeologists (IfA), The Robert Kiln Charitable Trust and the Portable Antiquities Scheme (PAS) to name a few.

It would be worth firstly explaining how we came to attend this awards ceremony. During his final months as Editor-in-Chief (2012-2013), David Altoft approached me with the idea of applying. Although previously met with some hesitation, ‘was The Post Hole suitable for these awards,’ we decided to apply and in November, The Post Hole’s Managing Editor Rianca Vogels, David and I put together an application form for the ‘Best Public Presentation of Archaeology 2014’. It was an exceptionally nervous wait till the nominations closed in February and the shortlist of entries were announced on the 2nd June on the British Archaeological Award website. Once the shortlist was released, the team published the news excitedly all over our social media pages alongside the creation of a special Facebook and Twitter banner to commemorate this fantastic news.

Upon receipt of the invitations, the anticipation and excitement of the team grew further. It must be remembered; The Post Hole was formed in 2008 and has only been ongoing for a relatively short few years compared to other publications and societies. However despite all this, we were shortlisted and invited to travel to London alongside our competitors; ‘New Secrets of the Terracotta Warriors’, Lion Television and MediaLab for Channel 4 and ‘Wemyss Caves 4D’, Save the Wemyss Ancient Caves Society, The SCAPE Trust and The Yorkshire Archaeological Trust.

On Monday 14th July, representatives from The Post Hole; David Altoft (Editor-in-Chief 2012-2013), Rianca Vogels (Managing Editor 2013-2014), Katie Marsden (Editor-in-Chief, 2008-2009) and myself headed to the British Museum to hear the outcome. The ceremony began with an introduction from the Chair of the BA Awards, Deborah Williams, followed by the compère for the ceremony, the charismatic Lloyd Grossman. The presentation of awards was conducted over a two hour period with each award introduced by Loyd Grossman and a short video reflecting the achievement of each project shortlisted. The winners were presented with awards and all shortlisted received certificates. Dan Snow, the TV presenter and President of the Council of British Archaeology, was also present and handed out a discretionary award to celebrated archaeologist, Beatrice de Cardi, who aside from recently celebrating her 100th birthday was the first secretary for the Council of British Archaeology and worked under Sir Mortimer Wheeler and his wife Tessa in the 1930s. In 2014 Beatrice was awarded the Gold Medal of the Society of Antiquaries for distinguished services to archaeology. I think we would all agree, she is an inspirational woman to all. The results were as follows: 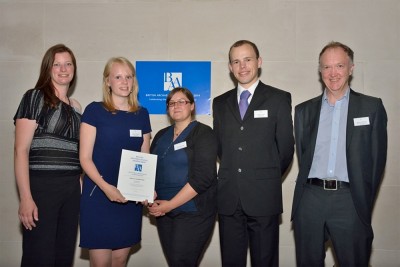 The awards were judged by a panel of experts and the ceremony marks the beginning of the CBA Festival of Archaeology, which is responsible for over 1000 events across UK from the 12-27 July. For more information on the ceremony, or to view photographs from the day, please visit http://www.archaeologicalawards.com/2014/07/15/british-archaeological-aw....

To conclude, the event was a marvellous success and The Post Hole would like to congratulate all those shortlisted and the winners of each category. Congratulations to Channel 4 and Lion Television, it was an honour to be considered alongside yourselves and the Saves the Wemyss Ancient Caves Society. As we mentioned on our social media pages, we were delighted to be the first student project to have been shortlisted and we hope this inspires our readers in the future. We thank you for your continued support and constant submissions that have resulted in The Post Hole being such a success.

A copy of the British Archaeological Awards 2014 certificate will be made available online for viewing and within Kings Manor, York. The certificates were presented to ‘The Post Hole’, this covers all past and present members of the team commending them for their hard work.