An Update from Hungate 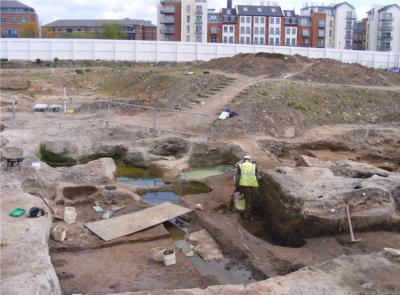 The last buildings to occupy the Hungate site were warehouses with light industry and before that 19th century housing, demolished as part of the slum clearances of the 1930's (YAT n.d.). For those who have not visited the site on one of its popular Open Days or as a volunteer or placement worker, things are looking very different today. As a student in York I have been lucky enough to visit the site twice in my two and a half years here and so have been able to witness the changes going on, albeit in snap-shot style. On my most recent visit in April of this year I found the site much changed. The team have reached Anglo-Scandinavian layers and have unearthed numerous cess-pits, building plots and two sunken-featured buildings.

During the first half of the 10th century it appears that the land next to what is thought to be a meander in the River Foss, adjacent to the Hungate site, was being built up using an as yet unidentified material which manifests itself as 'tiger stripes' in the stratigraphy. This is thought to have been for ground improvement and flood prevention. By the second half of the 10th century the land had been divided into equal plots of sixteen and a half feet defined by ditches and cobbled pathways. This is clear evidence of Viking Age town planning. 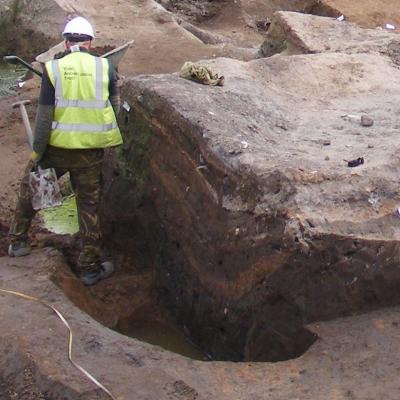 In the southern corner of the site there have been found Roman agricultural deposits and the site as a whole is dotted with Roman burials; both inhumation and cremation. Peter Connelly (Project Director), who was kind enough to speak to me about YAT's work at Hungate suggests that the landscape needs to be viewed from the perspective of those arriving in York from the river and that the sparsely used burial site on this marginal land would have been evocative from this viewpoint (pers. comm. 26th April 2010).

Arran Johnson, a York graduate, kindly agreed to speak to me about his work at Hungate. Having graduated in 2005 Arran has been working at Hungate since January 2007, nearly the beginning, and so has experienced all the site has to offer so far. He told me life on site is varied with deposits from the Victorian period all the way through to Roman, and possibly further. Arran is also involved with local people, often working with the community archaeology team as well as placements from further afield. He told me that a particularly positive part of working at Hungate is being able to see a big urban excavation, with many related facets such as community work, operating so smoothly and to schedule. 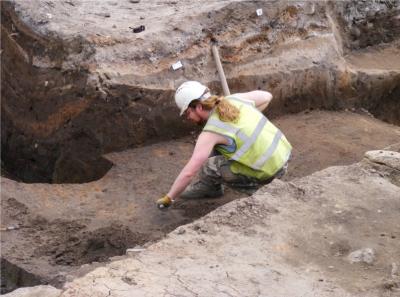 When the opportunity for this excavation arose, during the planning process for Hungate York Regeneration's project, the City Council was keen for DIG: Hungate to be a long-running project which would involve the community. And that is exactly what it does. Hungate, now in its fourth year (of five), has had over 17,000 visitors. Peter Connelly believes it to be the most visited developer-funded project in Britain (pers. comm. April 2010). The commercial team are joined by the Community Archaeology Team on Wednesdays and Thursdays which is made up of anyone who's interested in getting involved. Young offenders have also taken part over the last 3 years. When I visited the commercial archaeologists were joined by an English Heritage placement, there for two days, and two students from Bradford.

There are also regular Open Days the next of which takes place on Sunday 1st August - Yorkshire Day. Members of the public are welcome to come and see the site, talk to members of the commercial team and view and learn about recent finds. The site is open from 10am-3pm and entry is free. As Peter Connelly told me; 'its not just archaeology for the archaeologists, its archaeology for all' (pers. comm. April 2010). This extends to the publication of the site also which will be accessible for members of the public as well as the academic world. 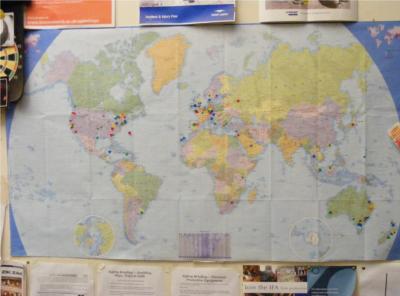 YAT's Archaeology Live training event, which runs every summer in York, has been held at Hungate for the past three years and attracts budding archaeologists from across the globe. Peter Connelly explained the popularity of the site to me. The opportunity to work on deeply stratified urban archaeology is rare and so people will travel a long way to train at Hungate, often returning the following year. As you can see from the map people have come from the USA, Canada and Europe as well as much further; there have been participants from Uruguay, the Cape of Good Hope and New Zealand.

Archaeology Live is a paid-for training school which teaches a range of skills from digging techniques and finds work to site recording, environmental sample processing and specialist seminars. As one might expect to get a place you must book early. You can book for as long as you want (or can afford!) from 1 or 2 day tasters (£50 and £90 respectively) to two weeks (?325) or more! For more information email trainingdig [at] yorkat.co.uk.

My thanks to Peter Connelly for talking to me and showing me round the site. 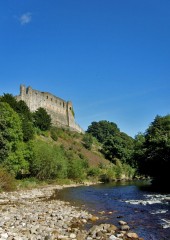 Richmond: A Town and its Castle
Mathew Robinson

A Spanner in the Works
Adam Cliff