To what extent is the divide between public and private life reflected in evidence for public worship in Roman Italy?

As one of my 2nd year modules, I had to plan and go on a 'Study Tour' abroad to investigate something of personal interest. As someone with a keen interest in religion and mythology, I chose to explore the divide between public and private in religion in Roman Italy.

Religions in the Roman world were very much split into public and private sections, although there was a certain amount of blurring between the boundaries. Public rites were considered to be those performed at public expense on behalf of the people, whilst private ones were performed by or on behalf of specific families (Festus De Significatione Verborum 245). The placement of specific temples suggests that they may have required more or less privacy, for example the Campus of the Magna Mater in Ostia is on the city boundaries and it may have been that the cult did not wish to be in the public eye. 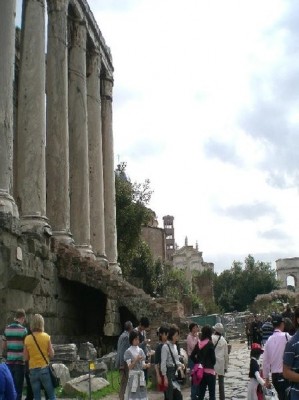 The division of space within the temple reflects that of private houses. Both have public and private areas, the latter being only accessible by certain people. Private individuals could do things like commission temples or altars for public use in order to display their wealth and piety (Cooley and Cooley 2004: 31). The evidence does also suggest a blur between the public and private divide, the most notable example being the Shrine of the Public Lares; a public shrine to what are usually private, household gods.

If one wishes to see the link between politics and religion in Rome, there is evidence enough in the buildings lining the Via Sacra and in one of the purposes for which the road was used. The Via Sacra is lined with temples and there are even more visible from the road itself, for example the Temple of Vesta and the Temple of Castor and Pollux (Figure 1). There were also several political or administrative buildings. The Basilica Julia, used for civil law courts, government business and banking, is in between the Temple of Castor and Pollux and the Temple of Saturn and the Senate House is adjacent to the Arch of Septimus Severus. Whilst all of the temples may not have been completely visible when the buildings in the forum were intact, there would still have been a sense of being surrounded by a combination of religious and political buildings. There is also evidence for the connection between politics and religion in the dual uses of some of the temples. The Temple of Saturn was not only used as a temple but also as the storage place for the bronze tablets, on which the laws of the state were inscribed, and as housing for the national treasury (Grant 1970, 81). The social order of the Knights paraded annually in front of the Temple of Castor and Pollux and balloting for official votes was held here from 145BC (Grant 1970, 86). The House of the Vestal Virgins also had a dual purpose as it acted as a safe deposit for public and private documents (Grant 1970, 61). 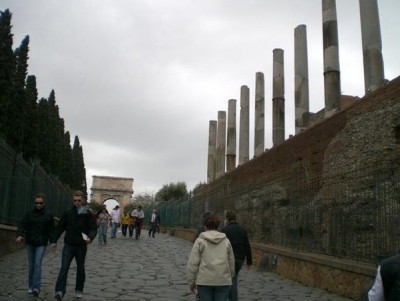 View up the Via Sacra showing the Temple of Roma and Venus (credit: author).

The highest honour a successful general could hope for was a triumph through the city and up the Capitoline Hill to the Temple of Jupiter (Beard 2007, 1). This included following the Via Sacra through the forum (Beard 2007, 81). The Via Sacra leads past the Temple of Venus and Roma, an important temple that, when complete, would have made the entrance to the forum imposing as it was set considerably higher than the road (Figure 2). From the Arch of Titus at the beginning of the forum one would probably have been able to see straight down the road to the Arch of Septimus Severus, with various temples also in the line of sight. It is difficult to tell what the exact view would have been due to the incomplete state of the ruins. With the procession ending at the Capitoline temple, the whole procession at once gave thanks to the gods and honoured the generals for their victory. This connection is also visible through things such as how monuments and objects with a political purpose were decorated. The rostra from the forum at Rome was used for political speeches but was decorated with reliefs of animals being led to sacrifice. It is equally interesting to note the proximity of the forum to the Colosseum. The Colosseum was built by Vespasian using his share of war spoils, in a similar way that temples or arches were raised by victorious generals to commemorate and give thanks for their victory (Claridge et al 1998, 278). 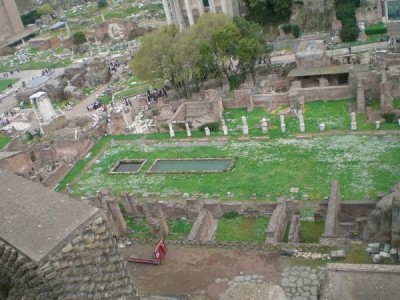 The forum at Rome was not the only one to combine religion with politics. The forums in Ostia and Pompeii were also religious centres. In Pompeii, the Temple of Jupiter overlooks the forum from a raised platform and the central clearing is flanked by the Temple of Apollo on the left and the Temple of Vespasian and the Sanctuary of the Public Lares on the right. If one looks out from the entrance of one temple, it is possible to see at least one other temple, if not more. From the entrance to the Temple of Vespasian one can see the Temple of Jupiter. This is also true of the forums at Rome and Ostia. In Rome, for example, the Temple of Romulus and the Temple of Antinous Pius and Faustina are next to each other and opposite the House of the Vestals and the Temple of Vesta (Figure 3). The forum at Ostia has two main temples, the Temple of Rome and Augustus and the Captioline temple. These face each other across the central clearing with a small circular temple dedicated to the Lares Augusti in between them. The forum at Ostia also contained the Basilica and the Curiae, once again showing the mix between religion and politics. Temples were not only found in forums but were scattered across each city. The imperial forums in Rome also contained temples; there were temples located on the Palatine Hill such as the Temple of Apollo, the Capitoline temple was on the Capitol Hill and of course the Pantheon was not in the forum either. Generally speaking, the most important temples were located within the forum. In Pompeii, however, the temples to Asclepius, Isis and Fortuna Augusta were all located some distance from the forum. The temples of Asclepius and Fortuna Augusta in Pompeii are relatively small and therefore unlikely to have been especially important. The Temple of Isis is enclosed in a fairly large area and was probably popular, but its location, towards the periphery of the city, suggests that the cult desired privacy. How much privacy it is difficult to say as, despite the high walls, it was overlooked by the theatre. One would not have been able to see in from the street, yet it may have been possible to see in from the theatre (Figure 4). 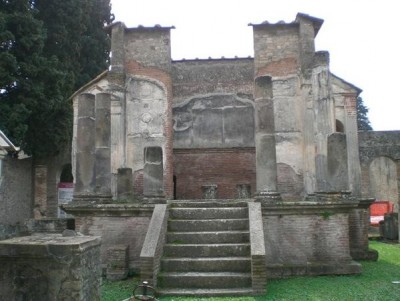 The Temple of Isis, Pompeii.

In Ostia there were most notably two groups of temples separate from the forum, the Republican temples and the temples on the Campus of the Magna Mater. The Campus of the Magna Mater is right on the city boundaries. The argument for political unpopularity cannot really be made here as it is a large site. If it was politically unpopular then surely it would not have been powerful enough to own such a large amount of land. It is more likely that the cult desired some level of privacy, despite being a 'public' cult. The Temple of the Magna Mater is set away from the rest of the buildings, heightening the sense that this cult was a private, yet public one. Religion also provided means for political advancement. A key example of this is the Temple of Isis in Pompeii. It was rebuilt by the son of a freedman, but as he was still a child at the time it is likely that his father provided the money for the rebuilding to help his son's social and political advancement (Cooley and Cooley 2004, 31) (Figure 5). Freed slaves were not allowed to hold political office and in return for rebuilding the temple the young boy was appointed as a member of the city council (Cooley and Cooley 2004, 31). The Temple of Fortuna Augusta was also paid for by a private individual, a man named Marcus Tullius (Cooley and Cooley 2004, 92). Constructing temples for the imperial cult was a way for the local elite to make an impression and promote their careers (Zanker 1998, 85). Considering the cult officials were all freedmen and slaves these actions are likely to have assisted in their social advancement also. Building public temples in order to advance socially shows that public religion was often exploited by private individuals. 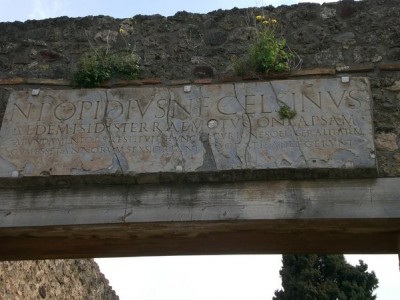 Dedicatory inscription of the Temple of Isis, Pompeii.

The next issue will have my observations on the public/private divide in relation to temples and ritual, as well as my concluding remarks.