Battling with bronchitis, Mick Aston gave a lecture on the 'Making of Time Team' in York during the Viking Festival Week in his trade mark stripy jumper. The lecture involved many photographs helping to explain the logistics and past of Time Team, as well as a few amusing moments and snippets of information about the rest of the current series! He was introduced to the large audience by Peter Connerly from York Archaeology Trust. 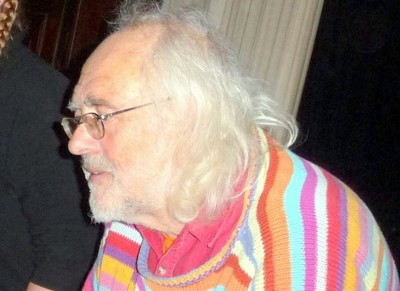 Over the 16 years that Time Team has been being made, there have been 172 three-day digs and a fair few specials, such as the live dig in York in 1999. Aston was one of the main archaeologists involved in starting time team and believes that it is important to continue portraying archaeology in the media to disseminate it to a broader audience, in particular young people.

The lecture mainly consisted of a slide show of pictures of anyone and everyone involved in Time Team, apparently 50-60 people are involved in each shoot. Time Team make a point of hiring young directors and Aston also suggests that archaeology graduates have a future in television production as a way of continuing to show archaeology to the masses. Apart from the numerous pictures of people, he also discussed how Time Team first started and how the original pilot has been lost, according to Aston "probably because it's crap". This was a view with which Tony Robinson agreed with and then used his television experience to give them pointers for improving the show. Highlighting a downside of working with microphones attached, Aston reminisced about having private conversations with Tony Robinson to then look up and find the whole team grinning at them having heard the entire interaction. He also revealed his most important bit of kit for Time Team...a helicopter - shame most digs cannot afford one on their budgets!

After the lecture there was a ten minute questioning time where he mentioned how he was not a great fan of English Heritage and how it was the editing process that made the Time Team digs often look so rushed and that we should not believe everything we see on TV. The lecture and questions answered seemed to go down well with the audience, which mainly consisted of middle aged couples who clearly considered themselves armchair archaeologists and probably found the hour lecture £10 well spent. However, as archaeology students, even with the concession making it ?8 we found it a little bit expensive. However it was still thoroughly enjoyable and the technical difficulties they had with the mic were solved efficiently. The lecture definitely did exactly what it said on the tin and told us all about the making of Time Team.

...And for anyone who wants to know... apparently Gromit makes his trademark stripy jumpers!