Seedy work! The what, why and how of archaeobotanical analysis

This article is the first of two by the author relating to archaeobotanical assemblages. They aim to introduce the reader to the processes involved in archaeobotanical sampling, analysis and application of results. This first paper deals with the methods involved in sampling, retrieval and identification. The second paper will present case studies in which archaeobotanical analysis has been applied in order to inform upon any social, cultural and economic practices which may have left their trace in the environmental remains after the abandonment or destruction of the site.

Archaeobotany is based on the identification, scientific analysis and interpretation of plant remains. These macrofossils are preserved by charring, waterlogging, mineralisation and desiccation. The latter tends not to apply to archaeobotanical assemblages in Ireland or the United Kingdom! In my experience, much of the material in this part of the world is charred – in particular that retrieved from prehistoric sites, although waterlogged material is also quite common. Charring is the result of the plant remains becoming carbonised under oxygen-poor conditions as a result of their interaction with fire; this leaves behind carbon skeletons of the seeds (Moffett 2009, 41). 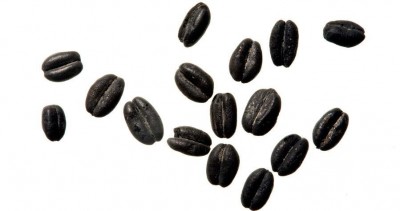 Typically, because they are the result of people’s interaction with cereal crops, chaff and weed seeds, these are the most common components of an archaeobotanical assemblage (Knörzer 1971; as cited in Fuller et al. in press). The most common ‘modes of entry’ (van der Veen 2007) of these remains into the archaeological record include food processing, preparation, consumption and storage as well as through fuels, animal dung, building materials and ritualistic practices (van der Veen 2007; Matthews 2009).

Primarily, seeds which have been charred are retrieved from drying-kilns, hearths, pits, ditches and floors. Kilns and hearths were often the location of primary activities concerned with cereal processing and it was here that grains, weeds and chaff were sorted, waste was discarded and the cleaned products dried for storage or further processing; such as grinding for flour or malting for ale production. Pits and ditches often indicate secondary deposition, as they tend to contain discarded waste from a kiln or hearth. These latter remains cannot be reliably used to indicate the environment within which they originated; rather they suggest the processes which resulted in their deposition.

The identification of each charred fragment possible and the subsequent assessment of the origin of each context makes it easier to ask questions of the data. This enables any attempt to understand the socio-cultural and economic practices of the settlement or site (van der Veen 1992; van der Veen 2007).

In its infancy, archaeobotanical studies focused on landscape reconstruction through phytosociology, but acknowledged faults with this model are associated with taphonomy and changes in agricultural practices (Hillman 1991; Küster 1991). The impetus towards statistical analysis of taxa frequencies in the 1980s was based upon ethnobotanical studies of pre-industrial farming communities and it led to a deeper understanding of traditional agricultural societies and their methods of harvesting, crop-processing and storage (Hillman 1981; Jones 1987a; Jones1987b). 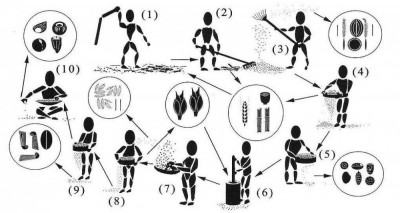 Figure 2: Crop-processing steps and the by-products which form archaeobotanical assemblages (after Stevens 2003)

By-products of the stages, as well as the resultant clean grain at the end of the process, are those plants parts which are likely to come into contact with fire through fuel stores, parching, routine processing and accidents (van der Veen 1992, 81). By understanding the stages and plotting the assemblage against each stage it should therefore be possible for archaeobotanists to infer how a society organised harvesting and how their crops were stored, as well as to suggest broader societal organisation, scheduling of labour and risk-management strategies. This theory was widely applied by all archaeobotanists in the 1980s and 1990s and has been further reworked by Reddy (1997), Stevens (2003), van der Veen and Jones (2006) and Fuller et al. (in press).

It is generally inferred that surplus clean grain is produced by complex and hierarchical societies for trade (Stevens 2003; Fuller et al. in press). Equally, those sites which show evidence for routine processing may be more domestic in nature. The debate is too detailed to outline here, but it must be remembered that differential preservation and cultural choice, as well as the context of the sample, influence the assemblage.

Other questions about agricultural practices can be asked of the plants within an assemblage. There may be evidence for harvesting methods (Wilkinson and Stevens 2008) when the relative frequencies of the contents have been analysed. Irrigation techniques identified through functional ecology (Bogaard et al. 1998; Charles et al. 2003) and evidence for the cultivation of cash-crops suggest intensification of production, which can be used as evidence for the emergence of hierarchical societies and trade networks (Miller Rosen 1997; Fuller and Stevens 2009).

Archaeobotany can tentatively be used to recreate the plant-based components of diets in the past. While many of the ingredients may not have come into contact with fire, small clues about prehistoric palates can be ascertained (Valamoti 2003). Alterations in preparation practices and place, as well as changes in crop choice, may be visible through very careful analysis of well-preserved assemblages (McCorriston 1995). Many prehistoric foods are silent, but may be suggested through careful analysis of the taxa.

Other themes which can be explored through archaeobotanical assemblages are climate change and land degradation, which are major topics in the Near Eastern Bronze Age (deMenocal 2001) and are thought to have been caused by an interplay of factors such as natural events (Weiss 2001) and expansion of agricultural lands, causing widespread clearance of forests and aridification. Further exploitation of the land, through irrigation and poor water-management may have contributed to the salinisation of the region. Carbon isotope studies of seeds, as well as germination requirements are utilised in studies such as these (Riehl et al. 2008).

The increasing use of animal dung in the Near East as fuel in the Middle Bronze Age as a result of woodland clearance can be detected by the increasing presence of steppe grasses, small legumes, barley and cereal chaff within an assemblage (Miller 1984). In this part of the world, animal management and foddering regimes can also be gauged through spatial analysis of threshing waste and small legumes, which are often fed to herds throughout the winter.

Thus, there are numerous topics which can be examined through archaeobotanical analysis. One crucial point is to understand that the charred remains have been preserved in the archaeological record only as a result of their contact with fire (Miller 1990, 75) and are therefore biased towards the preservation of plants that require fire for processing, preparation or are accidentally charred.

Inevitably, most assemblages have been built up during a series of activities and as such are secondary in nature (Schiffer 1976; Hubbard and Clapham 1992). It is important that ‘modes of entry’ (van der Veen 2007) are identified so that the potential of the data can be assessed (Hillman 1981; Jones 1987b; van der Veen 1992).

Soil samples are collected from features on-site; the archaeologists involved in the sampling may have consulted an archaeobotanist or environmental archaeologist in order to devise a relevant sampling strategy. Campbell et al. (2011) have produced a very useful document on behalf of English Heritage outlining the methods for gathering and processing environmental samples, and the Institute of Archaeologists of Ireland (Monk et al. 2007) have also produced similar guidelines. Alternatively, the post-excavation work may reveal that particular features are important enough to be processed for archaeobotanical remains.

Typically, the samples are stored in plastic sample bags or plastic buckets; the latter are more durable, easier to store and reusable. The soil is then processed according to its preservation method; typically flotation is carried out for charred assemblages from dryland sites. This comprises the use of a flotation machine or a simple bucket method.

The principle of flotation is that the light environmental remains, such as charred seeds and charcoal, will float to the top of the soaked samples. The macrofossils are then poured off the top through geological sieves typically measuring 2mm, 1mm, 0.50mm and 0.25mm. The retent, which are the heavy particles that stay at the bottom of the soaked sample, is also poured through the sieves.

All fractions are left to dry and are scanned for environmental material under a microscope at a magnification between x7 and x40. The charred seeds are removed from the sample and are identified. Initial identifications can be made using a variety of literary and digital sources, including Stace (1997), Jacomet et al. (2006), Van Zeist and Bakker-Heeres (1985) and Cappers et al. (2006). Further in-depth identification is carried out by comparisons with physical reference collections.

The results of identification are presented in a table; with all plant parts listed in the table and noted with their English and Latin names. The table is generally organised in terms of nomenclature of species (examples in Stace 1997). An example of a table with few archaeobotanical fragments is visible below.

The fragments are counted and listed in the table accordingly. Where possible, identifications are made to genus and species. However, where these identifications prove impossible, the remains are listed as ‘[Family] sp.’. In some cases, although much of the definitive identification criteria are missing, remains are recognisable to the analyst and are denoted by the letters ‘cf’. 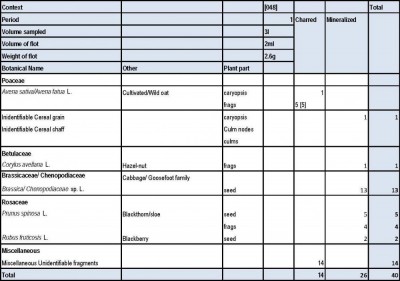 In order to assess the number of cereals present, either the embryos or the apices of fragmentary grains are counted where possible; it must be assessed which end is more suitable prior to counting in order to avoid double-counting of grains. Alternatively, an intact cereal caryopsis can be weighed and an estimate is then made of the number of whole grains which may originally have been present. These estimated figures are shown within square brackets in a table.

Tables also include information about the samples, including the phase they were associated with, the size of the sample and the flot, as well as species count. Basic statistical analyses are often also included, such as ubiquity values and the relative frequencies of taxa. The former is useful for quantifying the presence and absence of each taxon in the samples and takes into account differential preservation of plant parts (Hastorf 1999, 59). Relative frequency is a useful tool for analysing patterns and relationships in the data, though differential preservation may bias the results. By using both methods to complement each other, the limitations of either are lessened.

Additionally, the density per litre of each sample can be calculated by dividing the amount of specimens noted per sample by the volume of the sample. This can be useful in assessing whether the assemblage was formed by a gradual build-up, such as waste deposition, or was the result of a single episode, like an accidental conflagration.

Once identification and quantification has been completed by the archaeobotanist, the information is then collated into a suitable format to allow questions to be asked of the data. At this stage it is a good idea for the archaeobotanist to liaise with the archaeologist and other environmental specialists who may be involved in the post-excavation process. This will allow informed questions to be asked of the data and a multi-faceted report to be produced.

This article seeks to introduce the reader to the process of sampling environmental remains for the purpose of archaeobotanical identification and analysis; the aim of which is to extract any possible information about past activities on the site from any identifiable plant remains which may be present. The second article by this author will present case studies where the results of archaeobotanical analysis have been useful in building a better picture about activities on the site, including crop choice, processing and storage. 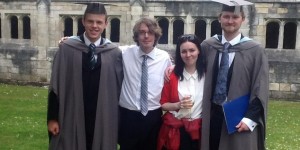 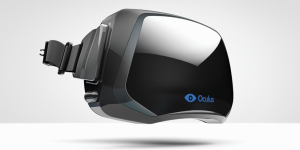 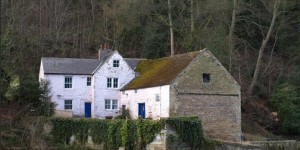