Capitalism, chaos and our postmodern society

There was a time not so long ago when design and craftsmanship were part of a local philosophy; where business ethics were driven by delight in one’s work and pride in one’s community. An era of rational order and symmetrical beauty reflected in society’s production of goods and arts. It was from this environment that a small Italian-American tomato packing plant sprung up in the heart of New York City allowing a local immigrant family to benefit from America’s post-war economic expansion. However, society’s postmodern evolution brought about structural changes which negatively affected this business and as a result, their way of life.

In this article, I will address postmodernism from three vantage points. First, I will examine manufacturing and labour’s surrender to the powers of ‘McDonaldization’. Second, I will describe the rise of a de-personalised ‘corporate America’ and the twilight of localism in the wake of postmodernity. Thirdly, I will analyse a museum’s recent trek into the abyss of a postmodern exhibition. All the while, I shall emphasise the material examples of this social theory.

In the post-World War II era, craftsmanship and commerce became increasingly controlled by mega-corporate machines which centralised creativity, production and trade; effectively converting human labour to automatons while cultivating consumers into mere purchasing agents (Ritzer 2001, 200; Smart 2005, 268 and 270; in contrast to Jameson 2005, 265). It is this process that George Ritzer (2001, 198, 203) labeled as ‘McDonaldization’, and as such, a part of Modernity. However, while Ritzer was right in noting that McDonaldization is a ‘process’, he did not fully articulate its transcending role as a bridge between two socio-economic eras (Figure 1), respectively the Modern Age and postmodernity (Ritzer 2001, 201). 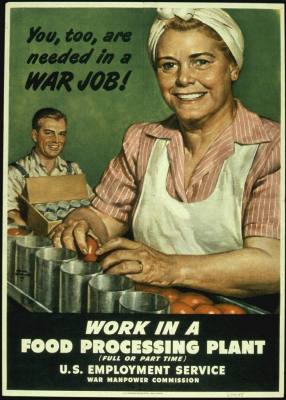 Figure 1: During the Second World War, a concerted effort on the part of the Federal Government and corporations to exploit American productivity inadvertently led to an assembly line consumer culture (Bensing 1945)

For example, Ritzer (2001, 201-03, 214) struggled to reconcile the seemingly self-contradictory nature of McDonaldization as a well-organised and efficient structure which paradoxically leads to an irrational and dysfunctional working class. Observable in everything from corporate and labour relations to consumer products (see below). Nevertheless, he maintained that McDonaldization is a modern process working in the increasingly synchronised, yet chaotic postmodern world (Ritzer 2001, 209); a valid but unsound argument.

Applying the concept of entropy for a moment, if the ‘underlining’ rational system (capitalism) has remained constant, emergent irrationality cannot be simply explained as a ‘paradoxical’ part of the aforementioned rational system (Baofu 2007, 108; Ritzer 2001, 209-10; in contrast to Ritzer 2001, 205). What can be said then? Something ‘foreign’ has entered and infected the balance of the original capitalist ‘system’.

I therefore posit that the ‘predictable’ rationality of McDonaldization is nothing of the kind. Rather, it is a cultural dynamic or ‘energy’ that upon spreading into the original economic environment altered it from its original state and created for itself, and society at large, what may be dubbed a late form of capitalism (Ritzer 2001, 211). In short, McDonaldization (along with other processes) has aided in the manifestation of the postmodern order, or if you like, disorder. Hence, it is not a modern process, but an embryonic stage of postmodernity.

A case in point was Giuseppe Creazzo & Sons, Inc., my family’s small tomato packing plant and wholesale distributor specialising in fresh organic tomatoes. It was started by my great-grandfather, Joseph Creazzo, and had its greatest success during the Great Depression and post-war boom. During this period, he supplied many local retail grocers and restaurants in downtown New York, typically owned by both immigrant and indigenous families. Simplicity of function was its rationale. There were no formal docks for drop shipments.

For example, the crates of tomatoes were unloaded from a truck at curbside. The ‘processing facility’ was a commercially-zoned basement, with the outgoing ‘tomato cartons’ made of inexpensive cardboard and the plastic wrap mounted to basic spindles. All processing of goods was completed by hand; wife, sons, daughter and granddaughter would select, wash, box and wrap the tomatoes. The family then drove the freshly packed tomatoes to a grocer or restaurant on a daily basis (King 2005, 222).

However, by the late-1950s, mega-corporate supermarkets, such as The Great Atlantic & Pacific Tea Company, offering a wider diversity of goods at discounted prices, had opened in the vicinity and local customers were drawn away, effectively killing off ‘mom and pop’ grocers, specialty meat shops and later restaurants (Anderson 2002; Holton 2005, 299). The rationality of an era simply became antiquated. Hence, an entire local economy was supplanted by an (impersonal) global mega-corporation (Ritzer 2001, 211).

For example, tomatoes, along with numerous other foodstuffs were now machine packed out-of-state by mega-distributors, such as Roma Foods, which also introduced ‘uncommon’ or international products into local neighbourhood supermarkets (Harvey 1989, 299 and 304-05; Kelly 1999, 124). Consequently, the neighbourhood packaging distributers, such as Giuseppe Creazzo & Sons, were forced out of business and the individual family members separated to find other occupations.

Here in a microcosm, Ritzer’s McDonaldization takes us cleverly from bourgeois modernity into the hyper-complexity of postmodern ‘corporatoxication’ - a convoluted state where multiple global institutions centralise planning and development, thus dislodging craft specialisation from the local community. In a socioeconomic sense, repetitive episodes, such as the narrative above, perhaps led to alienation between producer, retail employee and consumer (Palumbo and Scott 2005, 51-55). The effects of which may have included symptoms of social depersonalisation through the expunging of local ‘creativity’ along with other (local) socio-attributes (Levy 2010, 294).

Arguably, this aided societal fragmentation and cultural devolution by ceding localised planning and production to ‘unseen forces’ whose ‘foreign’ goods became ‘local’ cultural symbols through a well executed market-driven diffusion (Pikirayi 2006, 233). What we are left with are competing mega-corporations that conceive, develop and herd individual demand for goods, which are frequently offered in a vast array to an overwhelmed consumer (Harvey 1989, 286; Ritzer 2001, 203-05; in contrast to Holton 2005, 304-05).

The postmodern in an archaeological display

Thus far, we have discussed the socioeconomic influence of postmodernity on our everyday lives as consumers. However, I now wish to address the affect of postmodernism on the arts by highlighting an example from a museum display. Now, it should be clearly understood that part of the conceptualisation of the postmodern within an archaeological exhibit requires a divergence from the singularity of material interpretation (Keene 2006, 2-3). Moreover, it is suggested that a postmodern exhibit should break with static cultural ideals and immerse the public in a discontinuity of time where overlapping structural-agents and their past are understood through the direct sensory experience of the observer, ideally within a recreated landscape.

At the Tempe Historical Museum in Arizona, cultural plurality is found in a free-standing two-sided glass-cased display that doubles as a cross-cultural and inter-period entrance for the larger exhibit entitled: Surviving in the Desert. The glass case is delimited in part by information-laden standees that offer the viewer an aesthetic design which echoes Arizona symbolism in the form of Saguaro cacti. However, the emphasis on diversity at the expense of narrative becomes very apparent when one immediately notices the discontinuity with regards to the placing of bicultural artefacts (Keene 2006, 5 and 7; Johnson 2010, 199-201).

For example, on one side, prehistoric Hohokam artefacts (for example, weaved grain baskets, stone axes, ground stone known as ‘rip-rap’, which were used to close off or redirect irrigation channels) are displayed. Besides functional descriptions of the artefacts, the footnotes next to a collection of ceramic water jugs provide a written cosmological interpretation of water (i.e. its environmental scarcity and subsequent sacredness to the Hohokam). With virtually no break however, the other side showcases the historical artefacts of early settlers (for example, a hoe, branding irons, irrigation valves). As you round that side it merges into a Salt River Project/water-sports pastiche, drawn from artefacts from the early twentieth century.

Suddenly the message of the exhibit becomes vivid; (in this blurring of contexts) a shared landscape binds the historical celebration of water to its prehistoric and sacrosanct past. Eliminating time, from the observer’s point of view, the agricultural backgrounds of two (fundamentally unrelated and dissimilar) cultures meet in a mutual landscape/environment.

This is further realised by utilitarian disparities such as pioneer iron tools displayed parallel with indigenous stone tools, both competing for the viewer’s attention. It does not stop there either. Returning to the theme of water, a rather striking cross-cultural and inter-period contrast appears at one of the lower corners of the case. Here, a Hohokam plain red olla (a pot commonly hung inside an indigenous house to hold water) is positioned next to a nineteenth century miner’s canteen with a shoulder strap.

This begs the rational question - does a canteen really have anything in common with an olla? Were the ideas, aspirations or interests of the miner the same as the Hohokam farmer? We understand their mutually shared environmental need for water. However, from this are we to infer a commonly held view of landscape, or is this just a subjective conflation of landscape and environment (Johnson 2010, 159)?

Postmodernity is a cultural condition that claims objectivity is a fallacy. If this is true, then the following question must be posited - from what objective premise are postmodernists drawing their (quite authoritarian!) conclusions regarding positivism? An apparent Epimenides paradox then follows. To state emphatically that all observation is subjective logically invites their views to the same subjective criticism. This truth alone invalidates their argument. Another way to view the postmodern condition is this way - if everything is subjective, then the purpose of logical inquiry into any question becomes irrelevant; deductions become untenable and conclusions irrational because objectivity is not achievable.

If modernism contains flawed conclusions because humans are essentially flawed beings, then postmodernity at its best offers only justification for our fallibility. Furthermore, if archaeologists are going to wade into the debate of postmodernity, then they must be expected to engage in moral questions by way of positivist authority.

For example, social fragmentation should not be perceived as anymore ‘good’ for society, as scholastic under-achievement would be considered ‘academic’ for education. Dialectically, a postmodernist may respond that what we perceive as good and bad are socially constructed concepts and that societal fragmentation is relative to one’s viewpoint. Countering, the modernist may reply that the correct structure of society cannot be arbitrary, otherwise order and madness become immaterial.

To this end, I analogise Fromm (1941, 41, 46-48 and 99) when I say that Western civilisation has moved towards an intellectually confused and thus morally disordered state. When we move so far, so fast, we should pause and ask ourselves if it was reasonably the best course for society to undertake. If it was not, then science and the humanities should try to illuminate the path back to the truth, not snuff out the torch. 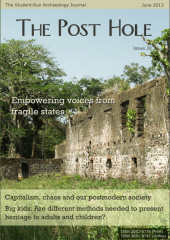 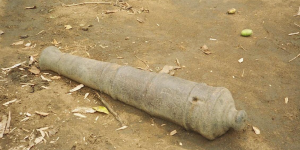 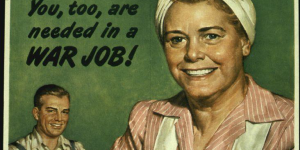 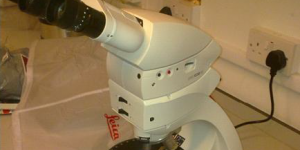 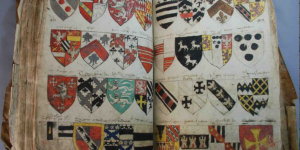 Archaeology under the microscope
Lisa-Marie Shillito