Ancient dental plaque: An unexpected journey into the past

Dental plaque is not the first (or the most glamorous) thing that comes to mind when you think of archaeology. So why would students like us spend a whole MSc or even a PhD studying it? In this article we outline the unexpected value of dental calculus, also called tartar, as a reservoir for information about the past, and how studying this material could give us enormous insight into ancient diseases, health and diet. We will then introduce how we are using calculus to understand health and disease in the transatlantic slave trade, by studying a population who died on board slave ships and were buried on Saint Helena, a remote island in the South Atlantic Ocean. 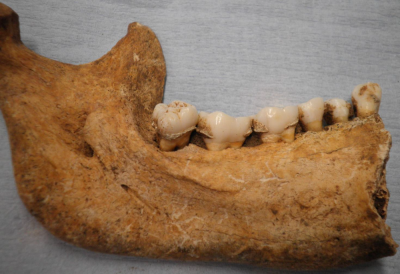 What is dental calculus?

Dental calculus (Figure 1) is formed by the mineralisation of dental plaque (Jin and Yip 2002). Dental plaque itself is formed by the build-up of bacteria which form a biofilm on the tooth surface. In the presence of calcium and phosphate minerals found in saliva, and in the absence of regular tooth brushing, the biofilm begins to mineralise. This means that the microbes present in the mouth become preserved in this mineralised ‘deposit’. At the same time, debris from food or inhalation also becomes entrapped in this mineral matrix. Thus, dental calculus is a unique deposit on teeth which consists of a stable mineral matrix which traps both microscopic particles and biomolecules like DNA and proteins.

How can dental calculus be of use to archaeologists?

Three main reasons make dental calculus a novel and valuable material for archaeologists. Firstly, calculus can survive very well because it is densely mineralised, preserving biomolecules and micro-debris over a long period of time. This means we can use the material to study many different populations, from Neanderthals (Hardy et al. 2012) to Victorians (Charlton 2012). For the first time, we can study disease biomolecules without requiring exceptionally well preserved samples. Secondly, calculus deposits on teeth are very common in past populations, before the advent of modern oral hygiene practices, making its presence archaeologically almost ubiquitous. Thirdly, calculus forms quickly during an individual's life making it an in-situ and undisturbed reservoir of information about past diet and health. Therefore, dental calculus is an exceptional material for the preservation of bioarchaeological information through different times and locations.

The presence of microscopic food debris preserved in dental calculus has been well documented in a variety of populations in different times and places, from Syria to Peru, and from Neanderthal to Medieval groups (for example, Henry and Piperno 2008; Piperno and Dillehay 2008; Hardy et al. 2009 and 2012). Starch granules, for example, not only indicate what kinds of plants were consumed but can also indicate cooking and processing methods by patterns of degradation (for example, Henry et al. 2009).

Although plant remains have been the main focus of past studies, other microscopic finds have been recorded. These include fungal spores (Charlier et al. 2010), microbial remains (Arensburg 1996; Preus et al. 2011) and diatoms from aquatic environments (Dudgeon and Tromp 2012). It may also be a potential material for carbon and nitrogen dietary studies (Scott and Poulson 2012). This preserved dietary evidence has been used to answer questions about long-distance interactions (Blatt et al. 2011) and environmental change, subsistence patterns and migrations (Dudgeon and Tromp 2012).

More recently, it has been established that we can access the DNA and proteins of ancient pathogens which inhabit the mouth and respiratory systems through dental calculus (Charlton 2012; Adler et al. 2013). Because dental calculus is abundant in the past, and does not require exceptional preservation to survive, we have the ability to discover the DNA and proteins of a number of ancient pathogens, many of which continue to make humans ill today. This could have real value in modern medicine, where it is important to understand how quickly pathogens can evolve, why certain pathogens are particularly virulent, and how pathogens manifest and spread in populations. By extracting pathogen biomolecules from dental calculus, we may begin to answer some of these questions.

How can we unlock the evidence?

After removing calculus from the tooth with a dental pick, we can unlock the microscopic and biomolecular evidence in three different ways. To uncover microscopic debris we breakdown the mineral matrix and liberate the embedded particles. After taking precautions for contamination from soil and the laboratory we break up the calculus in acid. Then the micro-debris can be removed from the solution and mounted on a glass slide for observation under the microscope. The identification of the debris is a huge part of our work as it is the morphological criteria of the particles and their optical properties which are used to characterise and identify the tiny particles. We also use a reference collection for comparative purposes.

To uncover ancient proteins we can use modern, proteomic technology (Charlton 2012). First, we chemically break up the calculus mineral, and then recover the ancient proteins by filtration. After breaking up the proteins into smaller segments, called peptides, we examine these using a technique called protein mass spectroscopy, which identifies all these peptides and assigns them to a particular protein of a particular species. We can uncover proteins from the human individual, like proteins involved in the immune system, as well as bacterial proteins associated with diseases. In protein form, we can see how the pathogen is attacking the host, and how the individual’s immune system responds.

It is also possible to identify which bacterial species are present by targeting the 16S rRNA gene, a region of mitochondrial DNA known to vary between different taxa (Adler et al. 2013). Firstly, bacterial DNA is extracted and amplified. These DNA fragments are then sequenced, and the resulting data assigned to particular species. Here it is possible to identify not only bacteria that cause dental diseases, such as Streptococcus mutans, but also important bacteria that live commensally in the mouth.

Dental calculus and the slave trade

Using these methods, dental calculus is being used to improve our understanding of diet and health among enslaved Africans buried from the mid-19th century. Studying health, diet and disease in this period sheds light on the lives of the enslaved. But more broadly, if we can identify biomolecular evidence of particular diseases, it can help us understand how these pathogens spread and proliferated in Africa, Europe and the New World, and the legacy of that movement today.

In 2007 and 2008, excavations on Saint Helena (Figure 2) uncovered a graveyard associated with the mid-19th century slave trade (Pearson et al. 2011). Saint Helena played a crucial role in the post-abolition period, acting as a station of the vice-admiralty court as part of the British programme of abolition. The West African Squadron, part of the British Navy, captured slaving ships of nations who were still active in the slave trade. The slaves on board were removed from the ships and stationed on Saint Helena at the ‘Liberated African Establishment’, in operation between 1840 and 1872, for recuperation, medical treatment and subsequent emigration. 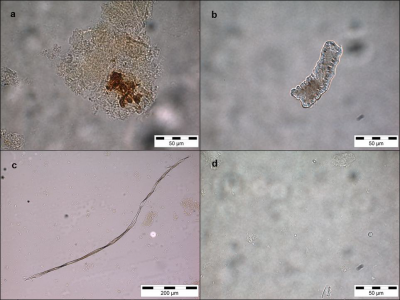 The graveyard excavated in association with this settlement uncovered the remains of over 300 individuals. This assemblage represents individuals, captured in West Africa, who died on board the slave ship or died shortly after landing in Saint Helena. This is a rare opportunity to study a unique population of people who experienced the Middle Passage, but did not reach the New World, and people who have died as a result of the conditions of their enslavement.

Preliminary results from the analysis of three individuals have revealed an abundance of plant remains, where plant tissues and fibre, including possible cotton fibres, are very abundant. A range of phytoliths and starches were also found (Figure 3). A reference collection is being compiled to identify the debris, comprised of the most common West African food sources, and known foods from slave ships. We hope the analysis will allow us to combine and compare the results with historical documents, giving us new details about the diet of the enslaved in the 19th century.

While we can use microscopy to analyse dietary remains, a proteomic and genomic study will give us details about the pathogens afflicting these individuals. This will help us understand, firstly, the pattern of diseases amongst the enslaved, the health status of these individuals. This will help us better understand how diseases spread to the New World, and perhaps give insights into how the same diseases present today continue to make us sick.

Calculus is a valuable, if surprising, material that we can we use to study the past. Abundant in the archaeological record, this material preserves biomolecules and food debris well back into the distant past. Through extracting this information we have, for the first time, the ability to access many diseases which are hidden osteologically, using samples which do not require exceptional preservation. Specifically, we have the chance to gain enormous insight into ancient pathogens, which can help to understand why the same diseases today continue to make us ill.

Thanks to Andy Pearson for access to calculus samples. Thanks to Jessie Regner, Camilla Speller and Sarah Fiddyment for assistance with laboratory work. 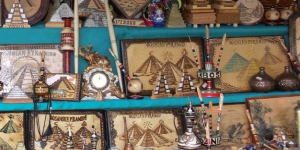