Food, Fur and Feathers: A Zooarchaeologist's Perspective on Hungate

Clare works as a Faunal Remains Specialist on the Hungate Project.

Hungate is still turning up surprises. The other day, it was a pit full of bones of goose wing tips. Professor Terry O'Connor had only seen a comparable assemblage twice before, and the closest parallel he could think of was a colonial period deposit from South Carolina. I wondered if it was related to wing-clipping, until I realised just how far down the wing the carpometacarpus extends. Terry thinks it could be to do with the making of quill pens, and asked me to check whether there was a bias towards left-hand side elements (left-hand wing feathers make better quills for right-handers, due to the way the wing curves). Having mentioned the deposit at the Publication Meeting, Nicky Rogers (YAT's small find specialist) dropped me an email suggesting arrow-fletching as a possible explanation. None of the fieldwork team recall digging the context, but a combination of Toby Kendall (Field Officer) and our Integrated Archaeological Database (IADB) indicates that the pit was probably 13th-14th century, dipping it out of my current remit. However, there are several other pits like it nearby, so I have quiet hopes of revealing further unusual deposits from craft activities as I carry on through the assemblage. 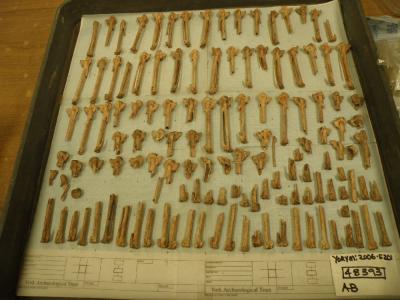 Figure 1 - A tray of goose carpometacarpii from 1 pit context at Hungate, representing a minimum of 65 geese. (Image Copyright - Clare Rainsford)

I have been employed by York Archaeological Trust for a year now as a Faunal Remains Specialist. I work full-time on the animal bone from Hungate, except for brief interludes to assess and write reports on animal bone from other evaluations YAT or ArcHeritage have carried out, or to work on all matters zooarchaeological on the Teffont Archaeology Project. Before starting my job at Hungate, I was an MSc student at York University, and before that, an Archaeology & Anthropology undergraduate at the University of Cambridge. I applied to York because, among other reasons, York runs one of the only dedicated Zooarchaeology Masters courses in the country. I started volunteering at Hungate while still studying, and have not been able to escape since.

As anyone who has been into the Hungate HQ warehouse will know, there has been a lot of bone recovered from the excavation. It is estimated that about 60% of the finds by volume is just animal bone — and the figure is more like 70% for the medieval period at the site. So far, I have assessed more than 59,613 fragments of bone from more than 750 contexts — and I have not even finished the post-medieval levels. Medieval and Roman Hungate is all still to come! The sheer quantity of bone poses problems for analysis — how do you record useful information from that amount of bone without it taking a lifetime? — and for long-term storage. We are working towards a publication on the post-medieval archaeology from Hungate, and part of my job is to work with the chapter authors and the finds teams to provide information from the bones which will contribute to the story of Hungate. The example of the goose wings shows how this exercise in interpreting the material works in microcosm. Terry O'Connor is an external supervisor on the project, and we benefit enormously from his extensive knowledge of the faunal remains found in excavations across York and the wider region — as well as his ability to identify birds other than chickens and geese (which is about as far as I manage to go!). In addition, I am part of a much larger team within the Trust, all working on different aspects of the same material. If I cannot find the information about the wider context of an assemblage that I am after on the project database, then I can ask the people who excavated it. Or Toby, who has photographs of every context excavated in Block H. Or I can go up to Aldwark and have a chat with Karen Weston (Artefact Research Assistant), who collates all the finds information and understands the bigger picture of how everything fits together, or Jayne Rimmer (Project Historian), the person responsible for bringing together the history and archaeology of the area, or Nicky, who knows about worked bone. My work on the animal bone is yielding some exciting results, but it only makes sense as part of a much bigger picture.

The other part of my job is solving the long-term storage problem posed by the huge quantities of bone recovered, by the simple expedient of deciding which boxes of bone it is important to keep, and which can be let go from Hungate to spend new and productive lives elsewhere. Designing a retention policy is something zooarchaeologists working for commercial units will have to do more and more frequently in future — our stores are too full and we simply cannot hang on to all this bone. Since I have been working at Hungate, a retention policy has also been designed at MOLA (Museum of London Archaeology) for faunal material from upcoming excavations in London. At Hungate we take into account a great number of factors when deciding which assemblages from which contexts are worth keeping for further research, to form part of the permanent site archive. There has been a huge amount of reworking of material from earlier deposits into later, post-medieval contexts at the site. The challenge has been to carry out detailed taphonomic work to spot the assemblages of bone which are still in primary deposits and can therefore give us the best information about the post-Reformation levels at Hungate. Every assemblage is recorded and photographed, and all the analysis for the publication done before any sort of decision about its long-term research potential is taken. This ensures we retrieve all the information we need and that there is a full digital archive for any future researchers even if the physical assemblage is not retained. Faunal material which will not be retained will, as far as possible, be given to people or organisations that do have a use for it. For instance, we have already agreed that some of our spare bone will be used to make up teaching collections at the University of Liverpool. 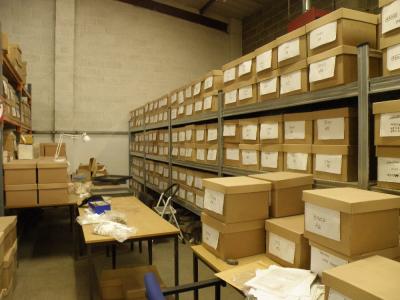 Figure 2 - The problem of post-excavation - these boxes represent only part of the total faunal assemblage recovered from Hungate. (Image Copyright - Clare Rainsford)

Hungate is not a run-of-the-mill site and adapting to the challenges it poses to your average zooarchaeologist has been a steep learning curve for everyone involved. However, the results which are starting to come from the project make everything worthwhile. We have identified an area of the site where they were breeding rabbits in the backyards of Victorian houses. We think pigs and chickens were also being reared around the site from at least the 17th century onwards — there have been two or three burials of young piglets, suggesting rearing of household pigs, some of which never made it to adulthood. One little thrush buried with great care in a tile-lined grave to the back of 19th century houses may tell us something about Victorian attitudes to birds in the area. Although we do not know the species, we can speculate that this may have been a song-thrush, and may have been associated with the linnet singing competitions held down the local pub. On the other hand, dogs and cats seem to have had a much harder time at Hungate, with one poor canine disposed of in an all-purpose midden deposit. Back in the 16th and 17th century deposits, most of the dogs and cats around the site seem to have been feral animals, and one deposit of cats displayed butchery marks which indicated very clearly that the animal had been skinned. There is also plenty of evidence for bone-working and craft activity at this time. Pinner's bones, made from horse metapodia, and the trimmings from making them, are found frequently in this period. So too are large groups of sheep metapodial bones, which are assumed to have been used in craft-working, as raw material to make all sorts of bone objects. This as well as the deposit of goose wings, which might constitute the first zooarchaeological evidence for use of goose feathers from the city of York, if not much further afield. And all this is without mentioning the evidence for scavenging rats in the industrial gasworks buildings, or the surprising presence of venison haunches and hare in 16th and 17th century contexts, or the pit containing several partial horse skeletons....

When the excavations in Block H finished last December, after five years, there was a lot of talk about "the end of Hungate". For me, Hungate is still very much alive and kicking — and I am reminded of this every time I walk into the back of the warehouse and see just how many boxes of bone there are still to work through. The stories which are beginning to emerge from the faunal remains are fascinating, but this is only the start. Seeing how it fits together with the rest of the archaeology, and with the earlier faunal assemblages from the site, are the next challenges we face in the on-going task to provide an insight into what happened on this patch of ground during the past two thousand years. Roman Hungate, and Medieval Hungate — with all those lovely pits full of bone — is still territory to be explored, recorded, photographed, analysed, debated and written up. There might not be another pit full of goose wings, but I am certain that there are many more surprises yet to come.