The Antikythera Mechanism has been a source of intrigue and amazement since the main fragment was discovered by Valerios Stais in 1902. It was found in the wreck of a Roman merchant ship off the coast of Antikythera where it had lain since between 85 and 60BC. The wreck had been discovered by sponge divers in 1900 and is now thought to have been carrying treasure back to Rome. Its recovery and subsequent analysis have been the impetus behind ground-breaking work from the start - the recovery of the Antikythera mechanism is probably the earliest example of underwater archaeology, made all the more treacherous by the technology of the time. More recently, cutting-edge X-ray tomography equipment has been used to look inside the corrosion and find out more about what made this incredible machine tick.

As investigation into the Antikythera Mechanism progressed, ideas on its function and purpose have continued to change, however it is now known that the device could calculate a wide range of cyclical astronomical and calender information including the dates of the Olympic games, the position of the moon and sun, the position of the five planets known to the Greeks and the dates when eclipses could occur. For more information see http://www.antikythera-mechanism.gr/faq/general-questions/what-does-it-do. 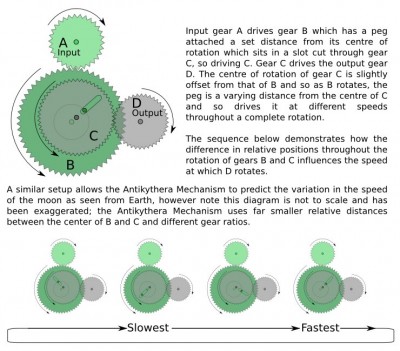 Diagram showing how the Antikythera Mechanism accounts for variation in the observed speed of the moon from the earth.

The original Antikythera Mechanism was not unique and there are several references to similar devices in ancient literature, however ancient metal recycling would have meant that other examples were destroyed. It is also thought that Archimedes wrote a paper describing the construction of such devices, however this has unfortunately also been lost. There are other examples in the literature of similar devices however fewer clues as to their intended use. The device was miniaturised enough to be portable (hence precluding a purpose of public display) and had doors covering the front and rear dials which were inscribed at length with a 'user manual' in Greek, indicating that the device was designed to be carried and used by someone other than the original maker. One persuasive theory is that it was for calculating astronomical values required for astrology which could be a time-consuming and inaccurate process; with the use of the Antikythera Mechanism this task would have been quick and easy. The inclusion of the signs of the Zodiac around the main dial also lends a little more weight to this notion.

Whatever the original purpose of the Antikythera Mechanism it is abundantly clear that it represented the absolute state of the art in astronomy at the time; one particularly satisfying design within it takes into account the first lunar anomaly i.e. the fact that the speed the moon appears to move from earth is not constant. The diagram below explains how this works:

The video below shows the current best reconstruction of the AntikytheraMechanism which, as far as current research goes, does everything the original did. I hope you'll agree this would have been pretty awe inspiring if encountered in the ancient world; I think it's still pretty clever today- this level of mechanical complexity did not re-emerge until the 18th century when clocks became the order of the day.

At time of writing, this is the first feature-complete model and the most up-to-date in terms of recent research.