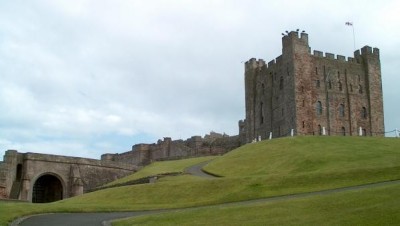 Bamburgh Castle is one of the most fascinating monuments in the north of Britain. It's imposing façade draws thousands of tourists and it frequently appears on our TV screens on programmes like ITV1's "Britain's Favourite View" and BBC's "Coast".

Anyone driving up the A1 between Newcastle and Edinburgh can hardly fail to notice the distinctive silhouette of Bamburgh Castle brooding over the Northumberland coastline. It has inspired poets and artists, film-makers, and the founders of a new religion, Christianity. It has lured invaders, from Scandinavia and Northern Europe. In over two thousand years it has not lost it's romantic appeal. The drama of it's presence is fortified by it's continuous occupation, which endures into the twenty first century, as, unlike other castles, Bamburgh is not a ruin.

When you walk through the medieval Barbican you are presented with a castle that has been shaped into its present form by restorations in the 18th century by Lord Nathaniel Crewe, Bishop of Durham, and at the end of the 19th century by the famous industrialist Lord William Armstrong. Crewe's restoration saw the addition of a windmill and the castle was used as a school, a dispensary and a hospital and maintained a coastguard service, a lifeboat and a welfare centre for shipwrecked mariners. The school and estate was run by Dr. Sharp, whose carriage can be seen in the castle today. Armstrong remodelled the castle as a stately home, joining the buildings of the inner ward with the 13th century Keep, rebuilding many of the walls and creating modern access roads. Much of the medieval stonework survives incorporated into the restorations, but the real grandeur of Bamburgh is under the soil.

There are few sites that can claim to have such a long and interesting history as Bamburgh castle. It is more akin to an urban excavation with over 3 metres of deeply stratified deposits that demonstrate occupation evidence at least as far back as the Bronze Age and perhaps into the Neolithic. 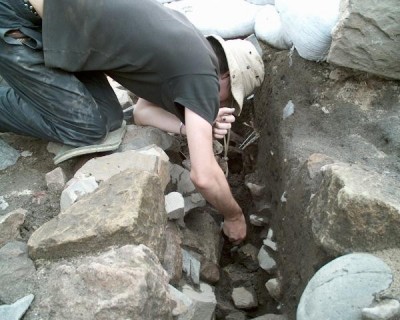 The site was first dug by Dr Brian Hope Taylor in the 1960's and again in the early 70's. He died in 2000, without having published anything other than a few tantalising pages of summary report in the Durham University Gazette. So when the BRP first started to dig in the castle, our knowledge of Hope Taylor and what he had found at Bamburgh was severely limited. We began by looking for his trenches. In 2000 we put a trial trench in the West Ward and found the edges of his excavation. We worked our way through his backfill and found plastic sheeting and fertilizer bags separating the backfill from the layers of unexcavated archaeology.

Until that point we didn't know if he had left any archaeology in situ, so it was a revelation that brought with it a huge responsibility of having to recover and complete Hope Taylor's site. The only way to do this was to dig a parallel trench adjacent to his. Our present Trench 3 does exactly that, and it is now at a stage where the deposits in our trench are joining up to Hope Taylor's as we cross the threshold from medieval into pre-conquest levels. The site is revealing complex features, floors, postholes, beam slots, stone foundations for timber halls, hearths and ash layers from metalworking and industrial processes. The range of finds is immense and as we get closer to the remains of the Saxon palace in its heyday we are seeing rare objects much more frequently. Decorated gold mounts, gilt harness fittings, chainmail, stycca coins, iron tools, and sword blades. One of the greatest swords ever found was discovered by Hope Taylor close to where we are now digging. This Saxon sword was fit for a king and may indeed have been a royal heirloom as it had survived for several hundred years before it was deposited in a much later context, perhaps as part of a smith's horde for reworking. Under X-ray examination, the blade was proven to be composed of a sharp steel edge fitted to six separate strands of iron, intricately twisted together in a process called pattern welding, the almost magical culmination of smithcraft.

In addition to Trench 3, we have excavated in many other parts of the castle, including Trench 7, under the 12th century chapel, where last year we revealed several phases of pre conquest stone building and changing lines of medieval defences. Trench 1 is located at the far end of the West Ward spanning St. Oswald's gate. Here, we have revealed evidence of the early wooden rampart that would have defended the Saxon palace and at present we are exposing the plan of several phases of large halls that are likely to have been guardhouses. In 2008, peeling off layers of medieval stone surfaces revealed gilt harness fittings. 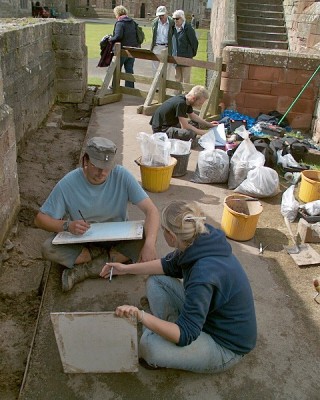 Our excavations outside the castle in the Saxon cemetery are being prepared for publication in association with Dr. Sarah Groves of Durham University whose groundbreaking work on the pathology of the population has brought new insights through the application of DNA and isotopic analysis. This study not only reveals important information about how people were living, their pathology revealing diet and lifestyle, general health and disease, but also where they came from and if family groups can be identified. Already the results show a mix of origin with some individuals coming from as far afield as Norway and the West of Scotland. This helps us to build a picture of what kinds of people made up retainers of the Northumbrian royal court. With radiocarbon dating of a large sample of remains we will be able to closely date the cemetery and identify how it changed and expanded or moved as burial practices changed in the 7th century.

Bamburgh is important because it shows a continuous high status occupation at one of the most significant royal centres in Saxon Northumbria. This is a region that has not been studied as closely as other areas. The Golden Age of Northumbria in the 7th and 8th centuries is well attested in history but the archaeological evidence can add so much more detail. Because of its status as a royal palace, Bamburgh can provide evidence of the wider economy and infrastructure, and for the 10th and 11th centuries archaeology here can throw light on a time which is very poorly represented in history. Was the Bamburgh dynasty deliberately erased from history by Norman conquerors? Broken swords and throne fragments excite the imagination and one can't help but speculate that the reason the border between England and Scotland exists where it does today is in no small part due to a lost middle kingdom centered around Bamburgh. Only the archaeology can provide evidence to further our understanding of this fascinating place and the people who once ruled here.

Field archaeology is fundamental to understanding our past. It is the story of the ordinary people as well as the Kings and rulers. It is a rigorous discipline of observation and recording and at the same time an experience honed art in the interpretation of fugitive evidence and traces in the soil. If you want to be an archaeologist or understand them, joining in a dig is a great idea.

Bamburgh Research Project field school is run by professional field archaeologists who have worked for many years in commercial archaeology. One of the goals of the project was to encourage and train future generations of archaeologists and heritage professionals. If you've never been on a dig before or if you're an old hand, Bamburgh can offer an experience that will be memorable and life enhancing. Our staff and project leaders are in the trenches with students each day, as the best way to learn archaeological processes is to observe and discuss them as they are encountered on site. Learing to see features in the soil and interpret them and to recognise their spatial and stratigraphic relationships is something that only experience can teach, so we involve students in discussion and observation of the site, filling in context sheets and adding to site matrices. We explain the stratigraphy and recording systems and students are taught how to do all aspects of drawing on site, site photography, surveying, environmental sampling, finds processing, data processing and even media. The project runs its own media department that all students can participate in, filming the archaeology and social history and editing films from the extensive video archive. We have evening lectures on the history of Northumbria and archaeological processes and site tours in and around the castle and local area. The landscape around Bamburgh is truly stunning, with a beautiful beach and the opportunity to explore the Farne Islands, including Lindisfarne, Holy Island which is just a few miles up the coast. Students and volunteers come from all over the world to dig with us and we try to make each season a fulfilling experience for all. We have a great social life off site and provide organised entertainment in the form of quiz night and BBQ's as well as everybody's weekly highlight PUB NIGHT! Our field school this year is open from June 8th to 26th July and costs £150 per week.

Heritage, Identity and the importance of History in Education
James Cameron

How human intervention is harming the wreck of R.M.S. Titanic, and how the site is protected by law
David Rounce