Archaeology and Journalism – an interview with Samir S. Patel 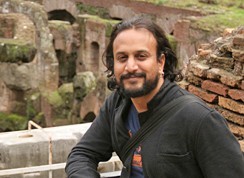 U.S. based Samir S. Patel is a full-time deputy editor at Archaeology, a magazine giving insight into the world of archaeology from all over the globe (Archaeology 2013). Samir’s work has also appeared in a variety of other magazines and journals such as Nature, The New York Times and Discover (Samir S. Patel n.d.). As a skilled journalist, photographer and editor, Samir has travelled across the world to get an in-depth perspective on a broad range of narratives.

After a brief meeting between Rianca Vogels and Samir in Tanzania this summer, where I also participated in the 2013 excavation at Songo Mnara, I followed up with an informal e-mail interview to his office in New York about his current work and how he got there.

How long have you worked for Archaeology Magazine?
I’ve been at Archaeology for just over seven years. I started as an Associate Editor and am now Deputy Editor.

How did you get involved with the magazine?
I trained as a science journalist at Columbia University here in New York. I spent some time travelling and working freelance after graduate school, and one of those jobs had me fact-checking at Discover Magazine. A few months later, I ran into a former editor of Discover at—of all places—a kick-boxing match. He had moved on to Archaeology and told me they were looking to add a new full-time editor. 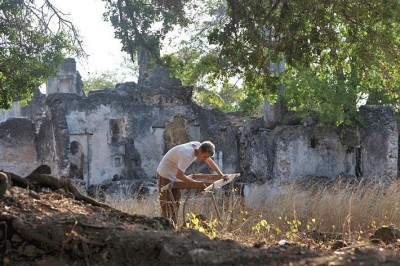 Figure 1. ‘Stone Towns of Swahilli Coast’, Samir S. Patel’s article for Archaeology. Excavations at the medieval Swahili town of Songo Mnara in Tanzania are yielding a wealth of detail about Swahili home life and its connection to global trade routes. Here, a student sifts material from a dig in one of the stone homes (image copyright: Samir S. Patel).

What exactly does your job entail? What kind of articles do you write?
I write and edit feature stories for the magazine and am the lead editor for “From the Trenches,” the news section at the beginning of each issue. I’ve also written the “World Roundup” in each issue since I started here. On a daily basis, I’m scanning news, speaking with archaeologists, and looking at pitches from freelance writers. I look for compelling stories, and then find the right place and format for them in the magazine. When I find something that I’m particularly excited about, I visit excavations, do interviews, take photos, and develop pieces myself—like the Songo Mnara story where I met Rianca. I write everything from tiny news blurbs to expansive narrative features.

Did you study archaeology at university?
We have some former archaeologists on staff here at the magazine, but I’m not one of them. I studied biomedical engineering and English literature at university. I then studied creative writing as a graduate student, spent several years working as a medical writer, and then returned to graduate school for environmental science and journalism. So no formal archaeology training, but I figure I’ve learned a lot in seven years at the magazine. I’ve never turned a trowel full of dirt, but I’ve spent time on dozens of excavations.

What is the most interesting piece you have written?
That’s a bit of an impossible question for me. Part of the reason I got into journalism was that each story has some different potential—subject matter, characters, narrative approach. I think I’ve found a way to maintain that freshness (for me, at least) at Archaeology, by selecting very different stories for the pieces I write myself. There are a few that stand out though. I wrote a couple of crime stories about looting in the American Southwest. These really felt like old-fashioned shoe-leather journalism. I did a photo essay on a Neolithic funerary site in India that was particularly exciting because it is a monumental place that almost no one has ever heard of; at times it felt like stumbling across Stonehenge. And I once wrote a piece about the archaeology of modern graffiti. That story got into archaeological theory a bit, which I find pretty fascinating, and elicited some strong reactions, both positive and negative. A lot of negative, actually.

I assume you travel a lot - does it interfere with your daily life?
The travel has never been a burden. I go abroad 2-3 times a year at most, and each trip involves a lot of preparation and a little luck with timing. I’ve been more conservative in my travel plans since I started a family. I try to make the trips a little shorter now.

What is your advice for students who wish to get into writing about archaeology, and are there any key skills they should try to obtain?
I encourage anyone interested in writing and journalism to read lots of newspaper and magazine stories, about any and all subjects that interest them. Take them apart to see how they work. Try to figure out how an idea becomes a story. Writing about archaeology isn’t different than writing about anything else—the fundamentals of reporting, research, structure, writing, and responding to edits constructively are the same regardless of subject matter. I’m an adjunct professor in journalism at Columbia, and this is advice I give to all my students. Yes, you have to be obsessive about learning your subject matter, but that changes with every story. What doesn’t change is mastery of the craft of journalism.

If you want to explore some of Samir’s work, please follow the links below: