Welcome to the 59th issue of The Post Hole. This issue is shorter in length than most. However, the content contained within this issue provides some fascinating examples of student-led archaeological research that The Post Hole is proud to present to you. I hope that the contents of Issue 59 provide as much enjoyment to you as it did to both myself and The Post Hole team.

A motif can be found throughout this issue - the osteological study of human remains in the burial record. The human skeleton has provided a corporeal link to those who lived before us for millennia. By glancing at the written record, the desire to have the remains of a loved one close can be traced to the Iliad, in which the ghost of Patroclis states ‘Don’t have my bones interred far from yours, Achilles…’ (Homer 2015, 416), or in the Crusades (1095-1291) in which the bones of a loved one were transported to their homeland for burial (Waldron 2021, 3). Throughout history, the importance of human skeletal and their corporeal link to those who lived before us has remained. Today, the scientific study of human remains in archaeology now provides a narrative for those within the archaeological record whose stories were untold; providing a voice to the voiceless. The works that are featured within Issue 59 of The Post Hole both feature in this pursuit.

The works of Bronwen Kennedy and Jack Eggington of the University of York form Issue 59. Kennedy in their piece titled Iron Age Burials and Their Reflection of Social Difference an in-depth and critical account of articulated inhumations for the most socially distinctive is provided by promoting the understanding of the socio-political influence of Iron Age society through the burial record. Eggington in their work titled A Study of the Relationship Between Schmorl’s Nodes, Body Mass, and Stature in Two Archaeological Populations provides a statistical review of the evidence of Schmor’s nodes at the sites of Baldock in Hertfordshire and St James’ Abbey in Northamptonshire. The site of St James’ Abbey in Northamptonshire has provided a keen interest for those at the University of York, featuring both in my own research on neoplastic disease and in the works of others within the university’s community. Due to their ability to shine a light on those found within the burial record, both Kennedy’s and Eggington’s work have been awarded with the ‘Editor’s Choice’.

I would like to finish this editorial by thanking the members of the team who will be leaving the journal this year. I wish you luck in your future endeavours. Finally, those who remain at The Post Hole would like to welcome the new Editor-in-Chief, Matt Mitchell. I look forward to the future of The Post Hole as one of the UK’s leading student-run archaeological journals with the team of 2022-2023. 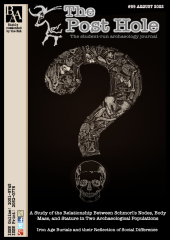 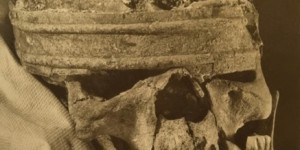 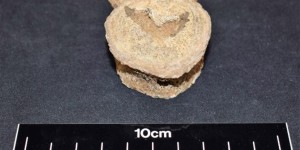 A study of the relationship between Schmorl’s nodes, body mass, and stature in two archaeological populations
Jack Eggington and Paola Ponce